How to know if an AirTag is following you as reports of stalking, thefts rise nationwide

Expert shares how to check for an AirTag on your car, bags
WLS
By Jason Knowles and Ann Pistone 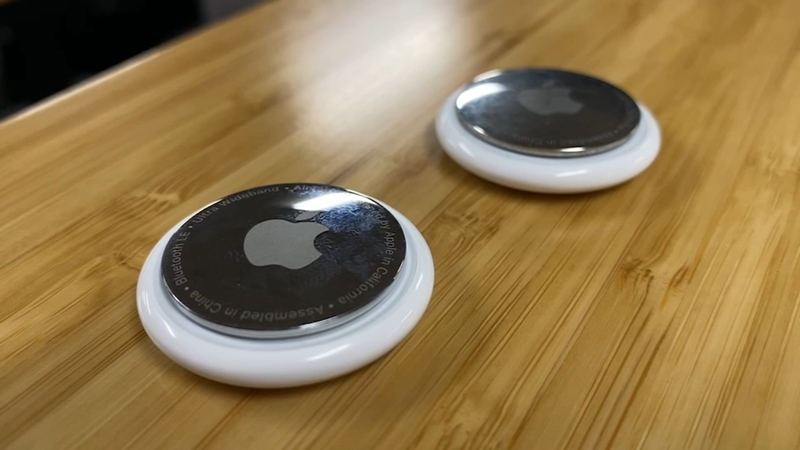 How to know if an AirTag is following you

CHICAGO (WLS) -- You may have heard of Apple AirTags and other new mobile tools that can help you find lost items -- but criminals can also use them to stalk and steal. The I-Team is finding out how you can avoid being tracked and followed.

Nationwide, there have been reports of Apple AirTags being planted on people and their belongings. They can even be used to help thieves steal cars.

For just under $30, you can buy an Apple AirTag and in just minutes, it is synced to your phone. The AirTags use an extensive network and the built-in Find My iPhone app to keep track of your wallet, keys or luggage or purse. But wrongdoers are seizing on the technology.

Consumer Investigator Jason Knowles tried out the AirTag, explaining: "I drove to Orleans and Oak and I have the Air Tag on hand. We will see if the AirTag tracks me."

And it did. The phone the AirTag was connected to was about a mile away, and the AirTag locked into his exact location, raising the concern of stalking.

"I had no idea this was even happening to me until the next morning I woke up I saw a notification on my phone: 'There is an unknown device near you and the owner can see your location,'" victim Courtney Chandler said.

She wasn't able to find the AirTag on her, but she told our ABC station in Philadelphia that she received an alert on her phone saying one was near.

Here's how those alerts work: a notification pops up within several hours of a mystery Air Tag being detected by another phone. Apple says its working on making that notification come even earlier.

The notification says: "AirTag found moving with you" and "The location of this AirTag can be seen by its owner." If you don't have an iPhone, you can download an app to detect unwanted AirTags.

However, you could get a push alert and the air tag could not be planted on your belongings. Someone you've been with for a long period of time could have it in their wallet, keys or purse, using it for what its meant to be used for: keeping track of items which could get lost.

Apple saying it innovated "the first-ever proactive system to alert you of unwanted tracking. We hope this starts an industry trend for others to also provide these sorts of proactive warnings in their products."

Steven Winkelman is a mobile analyst for PCMag. He showed the I-Team where you should look in case the bad guys hide AirTags and other similar devices, like the Tile brand trackers, which can be synced to any phone.

"Most bags at the bottom have foam or interfacing. That creates an extra layer of padding someone can just slide the tracker underneath that...and you would never know," Winkelman said.

Tiles and AirTags can also be hidden on your car, behind the license plate.

"Another would be under the wheel well," Winkelman said, adding that car thieves can then use the tech to study your habits.

"And you can say, 'Okay, this person gets home every night at 6,'" Winkelman said. "'They will leave every morning at 6, so maybe I'll pick it up at midnight.'"

Customers at the Apple store in Lincoln Park expressed concerns and say the tech can help, too.

"I actually know people that have got the notification like there's an AirTag in your car," Johan Thorne said.

"Yeah, I'm thinking of it like a tracking device on my car," Adrienne Pankey said. "There's been so many carjackings."

There's a sound which goes off between 8 to 24 hours after an AirTag has been separated from its owner. Apple said it's a "randomized time window " to prevent bad actors from using an AirTag to track someone. Apple plans on making the sound even louder.

Apple also says it works closely with safety groups and law enforcement and that it has identified more ways to update safety warnings.

Tile told the I-Team it has an app on the way soon for smartphones which can "easily scan for and detect nearby Tile devices and identify if an unknown device is near them."

Tile said they will also provide resources to victims about how to stay safe if they suspect they are being tracked.

So what if you find a tracking device on you? Call police. They may be able find the person who activated it by checking a device ID.

"Don't destroy it, because there is a battery in them. And that battery can combust," Winkelman warned.

To avoid this all together, you can turn off Bluetooth and location services on your phones.

Also, take a quick look at your belongings, inside your purse, backpack and pockets and make sure there is not a mystery tracking device on you.