Who is Husain Abdullah? NFL player penalized for end-zone prayer

WLS
1 / 5
Kansas City Chiefs safety Husain Abdullah became the centerpiece of a social media firestorm after receiving a penalty following his on-field display of prayer.
habdullah39 / instagram
Kansas City Chiefs safety Husain Abdullah was the centerpiece of online discussion on Monday night when he received a penalty for praying after scoring a touchdown.

Abdullah intercepted a pass thrown by New England Patriots quarterback Tom Brady, returned it to the end zone and slid on his knees and bowed in prayer. Game officials slapped Abdullah with a 15-yard unsportsmanlike conduct penalty, but the league has since admitted the penalty was made in error.

But as the online community continues to argue whether the NFL was culturally intolerant of the touchdown prayer celebration or it whether it was a misunderstanding, one question remains: who is Husain Abdullah?

Abdullah hails from Los Angeles, California and was raised in nearby Pomona, CA.Abdullah is the offspring of Yusuf and Sa'eeda Johnwell, and one of 12 children in his family. Abdullah is a practicing Muslim, and observes fasting during Ramadan, even during the NFL season.

Abdullah even put the he 2012-2013 season on hold to make a pilgrimage to Mecca, a religious rite of passage that adult Muslims are instructed to perform at least once in their adult lives.

Abulllah has two children, Hamza Abdullah and Esa Johnwell, and has shared personal moment of his children on Instagram and Twitter.


"Picked up this refreshing face from school. I love my Kameela" - habdullah39

Many users on social media have been comparing Abudllah to former Denver Broncos quarterback Tim Tebow, who was achieved notoriety for his on field religious displays. Tebow is an outspoken Christian, and was notorious for his kneeled prayers before and after each game. Tebow's kneeling became so well recognized that inspired a short fad known as Tebowing, which was very popular in the online community during Tebow's 2011-2012 season.

Many online users have criticized the league for addressing a penalty to Hussain while Tebow was allowed to kneel without consequence. 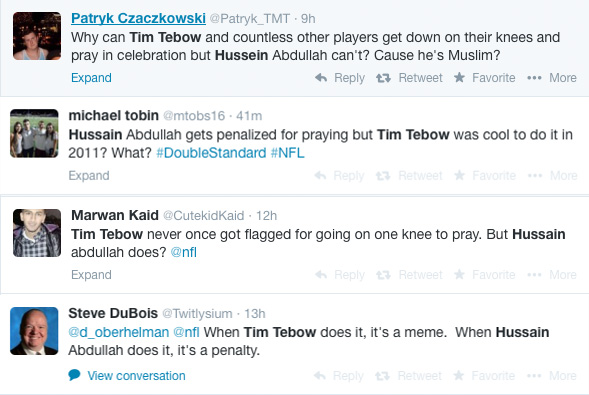 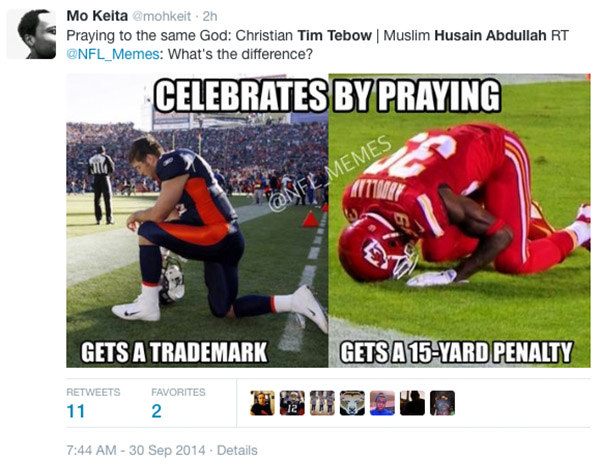 However, it's likely that the penalty given to Hussain wasn't for the prayer, but more for the actual sliding motion he made into the endzone.

Hussain told the Kansas City Star, "For me, I just got a little too excited . . . I think it was for the slide" when discussing the penalty.

The NFL did issue an apology over the penalty, but the incident has definitely gained Abdullah a wide network of support, ensuring him lots of media attention as the NFL season progresses.