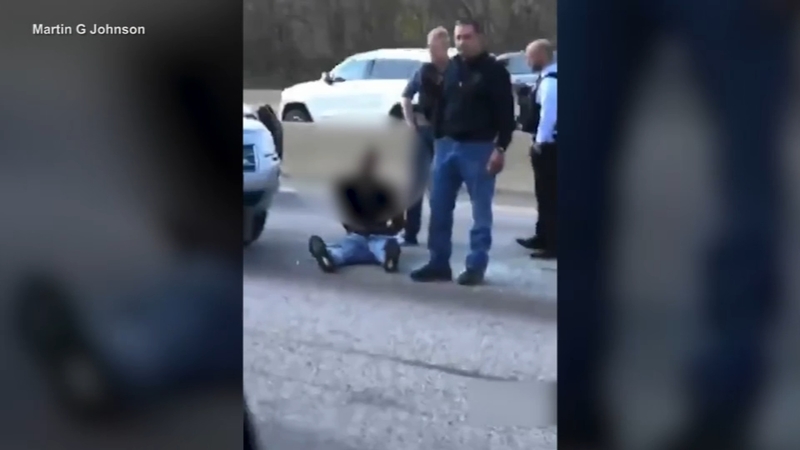 BELLWOOD, Ill. (WLS) -- Chicago police shot a suspect in the murder of Jaslyn Adams during a police chase on the Eisenhower Expressway Thursday afternoon.

CPD Superintendent David Brown said around 4 p.m., officers were in the western suburbs surveilling a suspect in the murder the 7-year-old. When they tried to pull the suspect over while heading eastbound on I-290, the suspect fled and crashed on the side of the highway near Mannheim Road. He then attempted to carjack another family's car that had stopped in the traffic on the expressway, police said.

Officers then shot the suspect, Brown said. The suspect was shot in the arm and sustained non-life threatening injuries, Brown said. He was taken to a local hospital for treatment.

CPD Superintendent David Brown gave an update on the police shooting which shut down I-290 Thursday afternoon, which he said is related to the murder of Jaslyn Adams.

Video recorded by a witness just moments after the shooting shows a man injured, sitting on the expressway, before officers escort him to an ambulance.

Brown said other people were involved in the incident and there are other suspects involved in the investigation, but would not give any further details about that. He said the man who was shot was the only person taken into custody Thursday.

Two firearms were recovered. Brown said it was not immediately clear if the suspect also fired at police or not.

All eastbound lanes of I-290 reopened shortly after 9 p.m.

Adams was shot and killed last weekend while in a car with her father, in a McDonald's drive-thru in Homan Square. She was shot six times.

McDonald's employees said two men jumped out of another car, ambushed the family and fired repeatedly into their car. Police said more than 50 shots were fired.

Illinois State Police said they are on the scene assisting Chicago police with traffic control as CPD investigates the incident.

The Civilian Office of Police Accountability tweeted that it was responding to the scene for an officer-involved shooting but did not offer any further details.