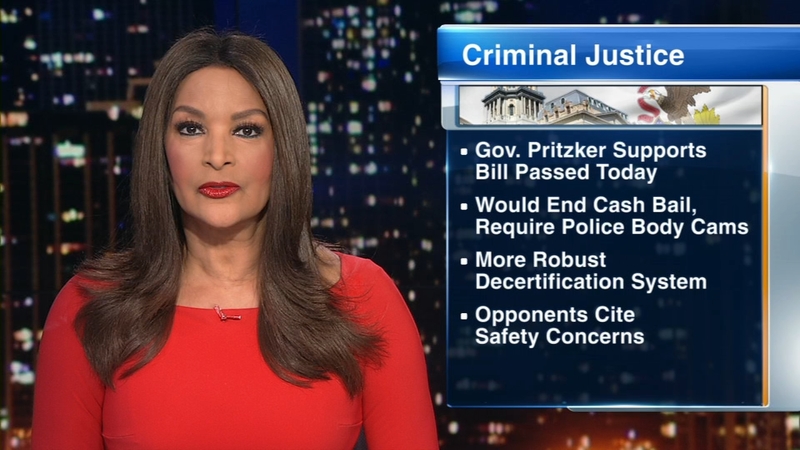 Originally House Bill 163 and now House Bill 3653, the law was written by the Illinois Legislative Black Caucus, and includes among other things ending cash bail for non-violent offenders state-wide, requiring all police officers in the state to wear body cameras, expanding use of force guidelines and training for police, prohibiting chokeholds, and requires the maintenance of misconduct records and the use of special prosecutors in officer-involved deaths.

The new bill was amended with proposals from Illinois Attorney General Kwame Raoul: including creating uniformity for officers and departments across the state, creating an easier and more uniform system of police certification and de-certification, and giving the Illinois Attorney General's Office authority under state law to investigate and resolve patterns or practices of unconstitutional policing.

"These certification reforms are the result of collaboration between my office, law enforcement, advocates and the sponsors," Raoul said on a statement after the bill passed. "I applaud the tireless effort of the Illinois Legislative Black Caucus to address criminal justice reform in Illinois in a comprehensive manner."

Cook County State's Attorney Kim Foxx also applauded the bill's passage, saying, "Eliminating cash bail ends the practice of detaining non-violent offenders simply because they are poor while also preventing violent offenders from being released because they can afford bail. Additionally, this legislation implements increased standards of police accountability and helps to rebuild public trust in the system. I'm grateful for the legislators, advocates and community members who went from 'protest to progress.' There's still work to do, but this is a step in the right direction."

But some law enforcement groups are critical of the bill.

"We had been working in good faith with the Attorney General on a bill that would make great strides to modernize law enforcement, but that legislation was dumped into this monster bill and the result is a betrayal of the public trust that gives many more advantages to criminals than the police. It ties the hands of police officers while pursuing suspects and making arrests, and allows criminals to run free while out on bail," the group said in a statement.