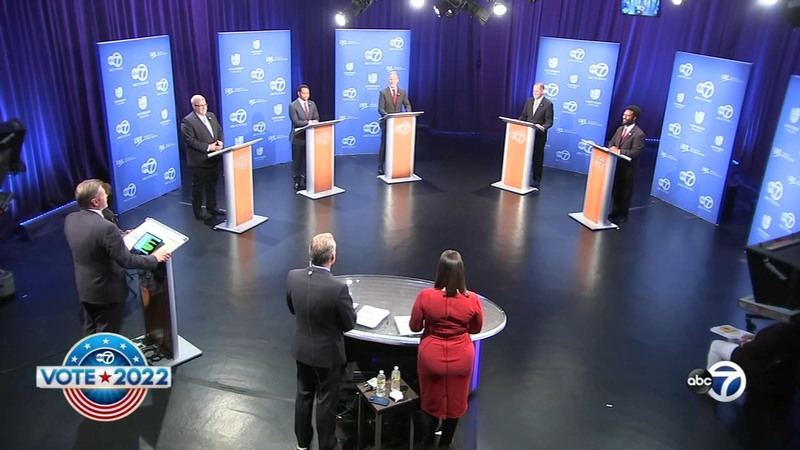 Early voting for the June 28 primary is already underway across the state, but Thursday night the six GOP candidates discussed a range of topics from gun control to education and abortion rights, as they vie to get on the ticket in November.

Polls suggest Aurora Mayor Richard Irvin and State Senator Darren Bailey are leading the pack, but with many voters still undecided there is a lot at stake for all the candidates.

In the wake of deadly mass shootings in Buffalo, Texas, and Tulsa, gun violence and gun control in America were the first on the docket in the debate.

All candidates were asked about the Uvalde school shooting and none of them said stricter gun laws are the answer.

An ABC7 political analyst weighed in on the Republican gubernatorial debate.

"If we don't hold people accountable we can't expect a lot out of them. If we don't arrest people that are doing crimes small and large that's a problem. They're not held accountable," Rabine said.

"As your governor the first thing that I would do is make sure that all our schools, K-12, are secured by armed guards," said Solomon.

The candidates were also asked about violence in Chicago.

"Chicago is a great city. And we've got to restore it," said Bailey. "And interestingly enough a week ago you probably heard me refer to it as a hell hole. And you want to know what happen within hours after I made that statement? A homeless man was burned alive, he's fighting for his life today."

"Fill every single police vacancy out there right now. Repeal this anti-police bill that JB Pritzker signed into law that coddles these criminals," proposed Sullivan.

"I've got the credibility to sit down with Mayor Lightfoot and State's Attorney Kim Foxx and talk about solutions. Before I got into politics I spent my life as a prosecutor in the United States Marine Corps," said Schimpf.
The candidates were also asked about Roe v. Wade and if they would support a woman's right to get an abortion in Illinois.

"As a lawyer and a former prosecutor I think it's irresponsible to comment and hypothesize on a leaked draft from the Supreme Court of a decision that hasn't even come down yet," Irvin said.

"I'm really a champion of adoption. My wife and I, my late wife Cheryl went through a lot to figure out how to adopt our fourth child," said Rabine.

"Right now in Illinois a preborn child can be aborted up until live birth for any reason no matter how heinous, like gender selection, and it's paid for by the taxpayers. That is radical. That is extreme," said Schimpf.

"It will be my priority to make sure that Illinois is an abortion-free state," said Solomon.

"We are being taxed to murder unborn children. And that is wrong, and I will fight back against it," Sullivan said.

"Day one agenda, we must end tax-funded abortion. There is no reason that our tax dollars should be funding over 50,000 abortions each year," Bailey said.

In 2019, Gov. JB Pritzker signed the Reproductive Health Act into law, expanding and protecting the right to abortion in Illinois, and on Wednesday the state ended its requirement that minors obtain parental consent to get an abortion.

In a statement, Pritzker's campaign said:

"Tonight, Illinois voters witnessed the crowded GOP gubernatorial field share the same stage for the very first time--and it was nothing short of disaster. Every candidate's true extremist colors were on full display amidst the hostile infighting that has come to define Donald Trump's Republican party.

"Rather than use the opportunity to present voters with concrete policy solutions, Republicans running for governor once again stooped to the personal attacks and radical dog whistles that have defined their primary campaigns," said JB for Governor campaign spokeswoman Natalie Edelstein. "Regardless of which GOP candidate comes out ahead on June 28, this debate showed Illinois voters that not a single one of them is prepared to lead on the issues that matter most to Illinois families. Their performances only further solidified that the modern GOP is too extreme for Illinois. From stripping women of their fundamental rights to rolling back comprehensive gun reform and blocking access to health care and education, these candidates proudly demonstrated just how far backwards they are willing to drag the state."