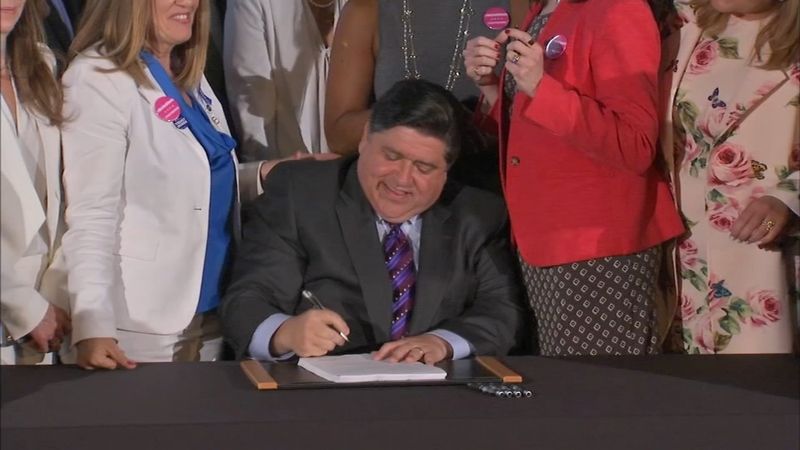 With much fanfare, Gov. Pritzker brought his wife MK as he signed what is being called the most progressive abortion protection bill in the country.

"Today, we proudly claim in this state, we trust women," Gov. Pritzker said.

Illinois' Reproductive Health Act establishes the fundamental right of a woman to have an abortion. It repeals a 1975 state law that placed restrictions such as waiting periods and criminal penalties for doctors who perform abortions. However, many of those provisions were never enforced because of court injunctions. But, with recent abortion bans in other states and threat of federal one, lawmakers wanted to make sure abortion remained a choice in Illinois.

While pro-life advocates call the legislation extreme, Gov. Pritzker said it makes sure abortion remains an option in Illinois during a time when many states are banning it.

"The Reproductive Health Act ensures that women's rights in Illinois do not hinge on the fate of Roe V. Wade or the whims of an increasingly conservative Supreme Court," Gov. Pritzker said.

"As the pro-life people in Illinois, we will not be silent, we will move forward," said Mary Kate Knorr, executive director at Illinois Right to Life Action.

"What happened today was the legalized killing of viable preemie babies in utero," said Peter Breen, of the Thomas More Society.

Because the new law wipes out certain restrictions, pro-life advocates frame that act as a late-term abortion bill, which co-sponsor State Rep. Kelly Cassidy (D-Chicago) said is not true.

'We have a viability standard in the law, and federal law with regard to abortion late in pregnancy reigns supreme, so there is nothing in the law that would make that scenario possible," State Rep. Cassidy said.

For State Rep. Cassidy, the bill signing is personal. Before becoming a mother of three, Cassidy had an abortion which she said saved her life and her fertility.