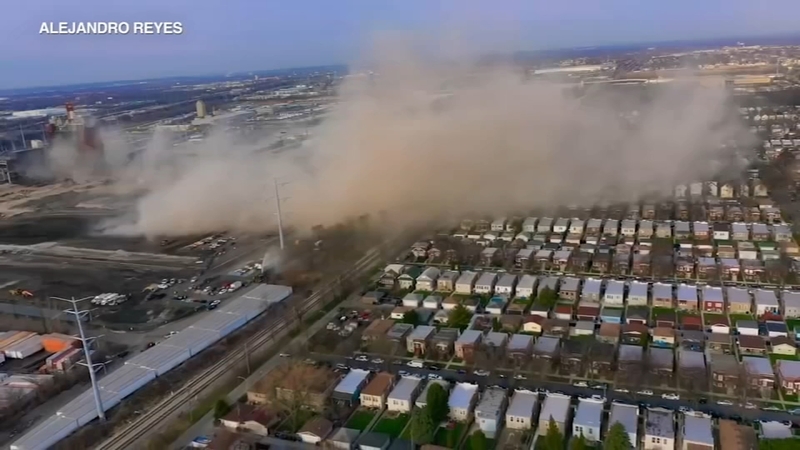 CHICAGO (WLS) -- The implosion of an old coal plant in Chicago's Little Village neighborhood has sparked new controversy and also plans for a lawsuit.

The demolition on Saturday sent a cloud of dust into the neighborhood and residents want to know why the city let it happen. A local attorney plans to file a class action lawsuit on behalf of residents.

The controlled implosion sent dust particles all across the neighborhood, leaving behind a thick cloud of smoke.

"About 10 minutes later you started seeing the haze and the smoke come through the neighborhood," said Daniel Reynoso, Little Village resident. "And a couple of minutes later it just got thicker and thicker."

On a city-approved permit, Hilco Redevelopment Partners imploded this smokestack at the old Crawford Coal Plant on Saturday.

Reynoso is a community organizer, and said Hilco had pledged to bring the smokestack down with restrictions.

"In a previous meeting with Hilco, the question was asked if they were going to use explosives or demolition in the remediation of the old facility. Their answer was always no," he said.

Mayor Lori Lightfoot said her office was reassured the demolition would be controlled. But minutes after the implosion a massive dust cloud fell on the site and throughout Little Village.

"The city was given repeated assurances that Hilco had a solid plan to contain the dust. Clearly that didn't happen," Chicago Mayor Lori Lightfoot said.

City leaders were furious over the aftermath Sunday.

"The fear and anxiety that residents feel about COVID-19 have only been exasperated with this situation," Ald. Michael Rodriguez said.

Several alderman have called for an inspector general investigation into the demolition.

The city has also cited and fined Hilco, ordering the company to conduct a full cleanup of the neighborhood.

Maclovio, a photographer, captured imagines of the fog-like haze that fell upon the neighborhood.

"It looked like something out of the movies, you couldn't even see in front of you," Maclovio said.

The city is now working to hand out face masks to residents in affected areas as health officials examine the air quality and collected samples of dust.

Calling the images of dust "outrageous," the mayor said she's ordered a full report of what happened at the site.

"I know the significant health disparities that the Little Village community faces, just as many other communities across Chicago face. So to see a dust cloud from a demolition roll across homes and businesses is simply outrageous," an angered Lightfoot said, standing before the construction site in question Easter Sunday morning.

"This is just a recurring pattern of gross negligence and incompetence by every level," said Lucky Camargo, Chicago resident.
Pending review, all non-emergency demo work across the city, including the Little Village site, has been stopped.

"We are working cooperatively with the City of Chicago to review yesterday's demolition event undertaken by our contractor," the company said. "We are sensitive to the concerns of the community and we will continue to work in full cooperation."

"I would not have major concern at this point based on what we know now," Arwady said.

Arwady said before the implosion Hilco had met asbestos standards. But, the commissioner could not elaborate on any data collected since Saturday's incident.