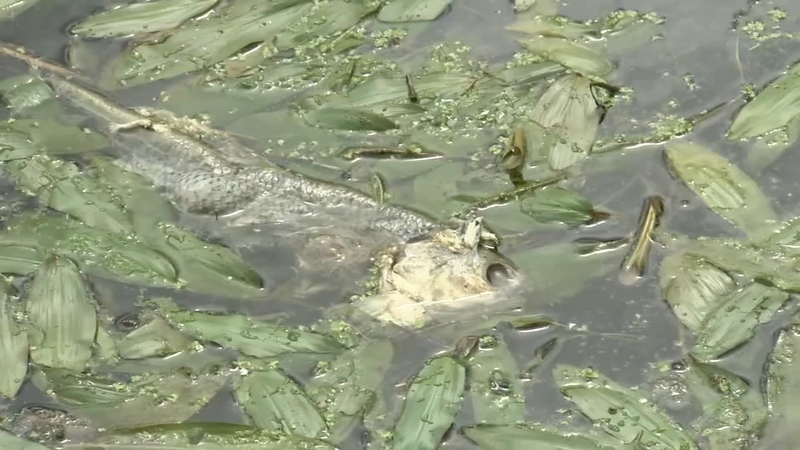 PORTAGE, Ind. (WLS) -- Water tests in Indiana show that cyanide concentrations have fallen to acceptable levels about a week after a steel plant leaked toxins into a tributary of Lake Michigan, killing several thousand fish and shutting down part of the Indiana Dunes.

Portage steel factory owner ArcelorMittal and the Indiana Department of Environmental Management have been criticized for failing to report the cyanide leak until several days after the water of the Little Calumet River was poisoned and an estimated 3,000 fish were killed.

State officials said the company allegedly dumped toxic levels of cyanide and ammonia-nitrogen in the river. According to the Indiana Department of Environmental Management, ArcelorMittal exceeded the daily maximum total for cyanide and ammonia nitrogen release. The department, which is leading the investigation, has requested ArcelorMittal help clean up the spill and monitor the river's chemical concentration.

The steel factory admitted to leaking the chemicals last week, and blamed the exposure at its Burns Harbor facility to a "failure at the blast furnace water recirculation system," a spokesperson for ArcelorMittal said at the time.

Last week, dead fish and toxic chemicals in the water caused several beaches in Northwest Indiana to close, including parts of the Indiana Dunes National Park.

The National Park Service said the water out to 300 feet at the national park's Portage Lakefront and Riverwalk beach area has been closed since last Wednesday. Portions of the Little Calumet River were closed between Highway 149 and 249, the park service said. The trails remain open.

The effects of the spill are already being seen.

An Indiana steel plant dumped toxic levels of cyanide and ammonia-nitrogen in the Little Calumet River, killing fish and shutting down parts of the Indiana Dunes.

In a statement, a spokesperson for Luxembourg-based ArcelorMittal said water tests of the Little Calumet River performed Sunday showed acceptable levels for cyanide and ammonia. On Tuesday, the environmental department said tests of the river and of the Lake Michigan shoreline showed no traces of cyanide.

The ArcelorMittal spokesperson said daily tests would be conducted to monitor water safety.

"ArcelorMittal remains committed to transparency with our stakeholders," the spokesperson said. "We are deeply saddened to hear of the 3,000 fish estimated by IDNR that were killed as a result of the incident and are working collaboratively with governmental agencies and other stakeholders to address the impacts that occurred."

The dead fish included panfish, shad, channel catfish, bass and walleye, the environmental department said. The department said that the public utility company Indiana American Water has not detected cyanide in its water, and will continue monitoring water at its Ogden Dunes treatment facility.

The effects of cyanide depend on the amount a person is exposed to, according to the Centers for Disease Control and Prevention. Symptoms range from dizziness and a headache for a small exposure, to convulsions and loss of consciousness for a large exposure.

The ArcelorMittal spokesperson said the company is conducting an internal investigation into how the "unfortunate and isolated event occurred, including the failure of the blast furnace water recirculation system, which resulted in the release of wastewater containing the elevated levels of ammonia and cyanide."