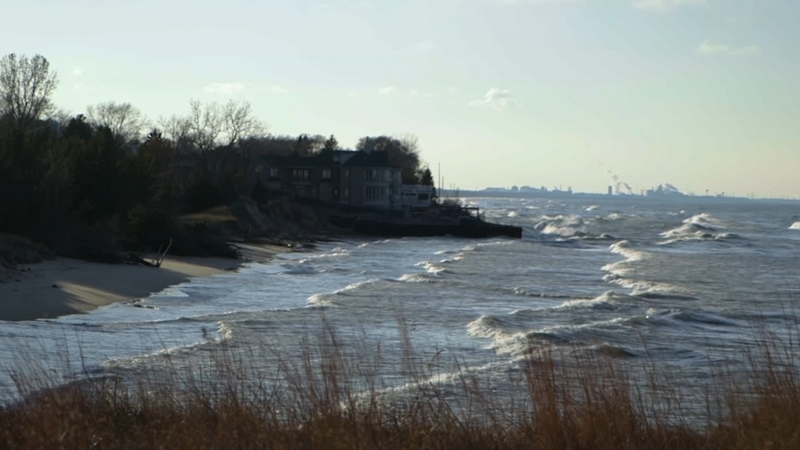 PORTAGE, INDIANA (WLS) -- America's newest national park could be at risk as erosion causes permanent damage across the shores of Lake Michigan. The Indiana Dunes National Park is facing near-record water levels and, as a result, unprecedented erosion.

The Portage Lakefront Pavilion and Riverwalk remain open on the western side of the park, but the beach has been closed for safety reasons.

Portage Mayor John Cannon sees the erosion as an existential threat to the dunes.

"Just last week, in four days, we lost 16 feet of sand and concrete sidewalk that fell into the water," Cannon said, pointing out the fully underwater beach west of the pavilion. "There was 160 yards of beach out in front of Ogden Dunes, and we had nearly 200 yards of beach (at the pavilion)."

Paul Labovitz, superintendent of Indiana Dunes National Park, said the problem stems from man-made barriers which have exacerbated the natural process of erosion.

"Because of the Port of Indiana and the man-made structures to the east of here, it's interrupted the flow of sand that's predominantly east-to-west," Labovitz said. "This beach should be nourished naturally by that sand. It's not been nourished for 50 years."

Currently, the U.S. Army Corps of engineers dredges sand every year from east of the port, carries it west, and dumps the sand back into the lake. But that's not even enough for a short-term solution.

Indiana State Senator Karen Tallian (D-Portage) lobbied in April to fund sand replenishment, but the item was cut from the Indiana state budget at the last minute.

"Today, houses and public structures are in imminent danger. My office has requested emergency funding from Homeland Security," Tallian wrote in a statement to ABC 7. "At this time, only the governor has the ability to dip into our state's $2 billion-plus in reserves to save our beaches and our homes. Unfortunately, my office has yet to receive a response to my requests to address this emergency."

Last week waves washed into a man-made pond behind the Portage Pavilion, which the mayor worries could irreparably damage the foundation within the next year.

The park superintendent does not consider it an imminent threat to the building, but does agree that the structure could be at risk if the lake levels don't normalize.