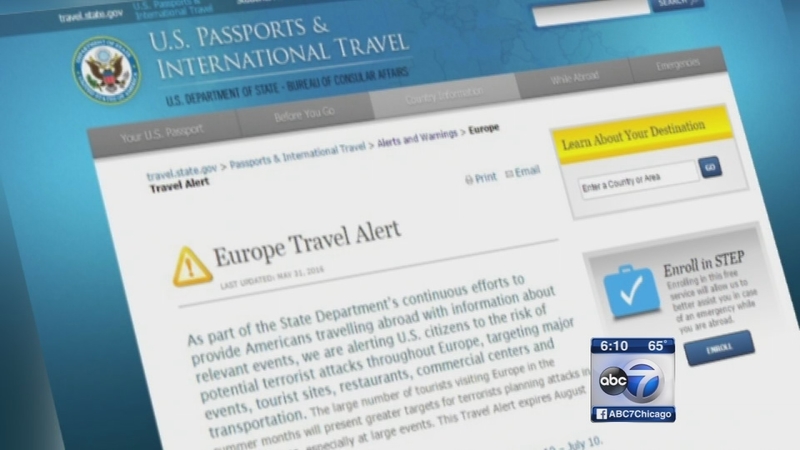 The alert is for all of Europe and comes as vacation season starts.

Several of the major events in Europe are the reason that many Chicago travelers will be going, including the Roman Catholic Church World Youth Day.

Archbishop Blase Cupich, of the Archdiocese of Chicago, will lead an official delegation of at least 100 Roman Catholics from Chicago to the event, which will be held this year in Krakow in southern Poland.

The festivities are expected to attract 2.5 million worshippers, including 30,000 Americans and 400-500 additional Chicagoans. Pope Francis will also be in attendance inflating already heightened security concerns.

"This alert was issued just as they always are based on an accumulation of information and what we know continues to be an interest by terrorists groups to conduct attacks against western targets and Americans specifically in Europe," said John Kirby, a State Department spokesman.

In November, terrorists targeted an international soccer match in Paris which killed 130 people.

Of particular concern this summer is the European Soccer Championships in France/ The soccer finals to be played in this same stadium that terrorists tried to blow up six months ago.

"You've got this European football championship and of course World Youth Day, all of which is happening in June and July. So it was a good opportunity to put all of this in perspective," Kirby said.

This State Department alert urges Americans to be vigilant in public places or when using mass transportation. Tourists also should be prepared for additional security screening and unexpected disruptions.

"We absolutely don't want to discourage travel or tourism to Europe," Kirby said.

On Tuesday, Chicago-based United Airlines sent out emails to its best customers plugging reduced fares to Europe, including special summer prices to Paris.

State Department officials regularly issue similar warnings but this one is punctuated by specific concerns about the numerous large-scale events in Europe during a short time period, which officials say "have been attractive to terrorists in the past."

A Chicago Archdiocese spokesperson said they will "monitor travel alerts and encourage all participants going to World Youth Day in Krakow to do the same.