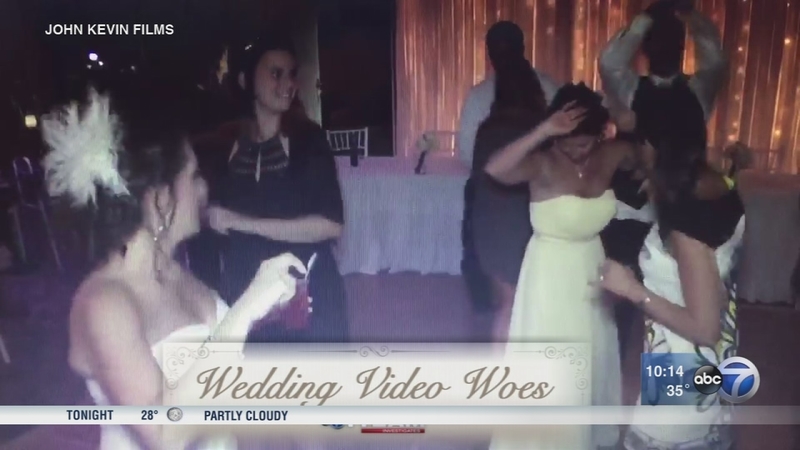 CHICAGO (WLS) -- Some angry brides claim they've waited several years for wedding videos. They are moments that couples want to cherish forever. But the frustrated brides said they've been begging one local business man to turn over the videos.

Erin Brewer can only look at photographs of her August 2012 wedding day because she said one man still has her wedding video.

"We want that memory, we want to be able to share it with our friends, our family, and our children when they get older and we can't," Brewer said.

She paid John Kevin Mohan from John Kevin Films $1,225 but four years later doesn't have the produced video. She said she just received the raw unedited footage this week, after the ABC 7 I-Team's investigation.

"And there were people who gave us personal messages and there are some people who have passed away since that we really want to know if they talked to us," Brewer.

The I-Team found that John Kevin Films has an F with the Better Business Bureau for similar complaints.

"It being almost five years since November 11, 2011 when my husband and I got married, it makes me furious that John Kevin-I feel like he is a con artist and I feel beyond frustrated that I tried to figure out how to get my wedding film," Grall said.

Nikki Novak said she too received some of the footage of her August 2011 wedding but not a fully produced video.

John Kevin Mohan told the I-Team Novak still has a $325 balance due but that he would forgive it because of the delays. He admitted the other 2 brides have paid in full and told us he would fulfill his end of the deal.

"I'm sorry, I'm very sorry. As soon as I found this problem with the editing, I stopped selling wedding contracts. I came out and filmed everyone's weddings to get them memorialized knowing that eventually I would get this editing problem under control, which i am at this point. The jobs are getting done," he said.

"The editing computer I had put together was not up to the task of editing high-definition footage. The program froze, it stalled, it crashed. I ended up having to borrow money from my family. So, I'm getting them done finally, but it is still taking me a long time," he said.

He said 11 other brides are still waiting.

He said he hopes to have all of them done before the holidays.