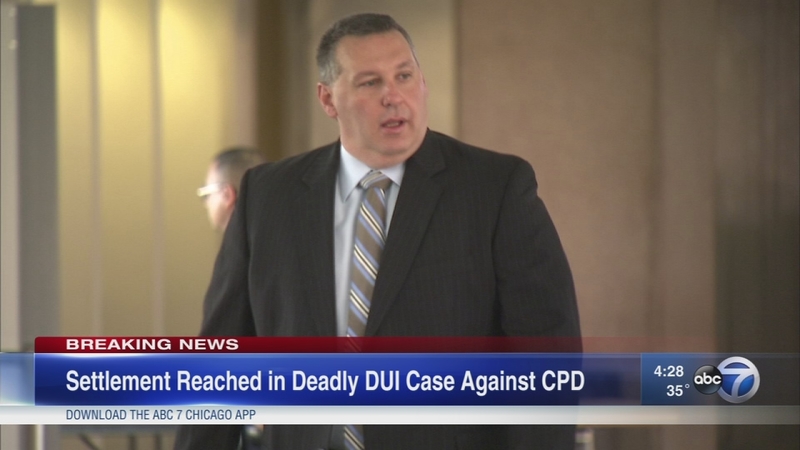 CHICAGO (WLS) -- A settlement has been reached in a wrongful death lawsuit in a fatal 2009 crash on the Dan Ryan Expressway involving a Chicago police officer.

Two men were killed in the crash and in 2012, Chicago police officer Joseph Frugoli pleaded guilty to charges of drunk driving. The families of the men killed in the crash, Andrew Cazares and Fausto Manzera, filed a civil lawsuit against Frugoli and the city of Chicago, alleging that Frugoli was protected by a so-called police "code of Silence." City of Chicago attorneys denied Frugoli was protected by a Chicago Police Department code of silence.

The trial in the civil lawsuit began trial last month and before the jury took the case Friday, both sides reached a settlement. The terms of the settlement were not disclosed,

In court on Nov. 30, Frugoli admitted he is an alcoholic that would binge drink on several beer and Jagermeister shots up to three times a week. Prior to plowing his SUV into Cazares and Fausto's stalled car, Frugoli was involved in other accidents, but was never disciplined by the Chicago Police Department. Those other accidents included two crashes 24 hours apart in January 2008, where Frugoli was suspected of driving drunk. The first occurred when Frugoli's city-owned Crown Vic smashed into a concrete wall.

During the closing arguments, attorneys hammered the city for withholding documents related to Frugoli's involvement in a bar fight in 1992 that led to a five day suspension.

Frugoli was sentenced to eight years in prison and is due to be released in April 2019.