Who will replace Kamala Harris as a California senator? These are the top contenders

Xavier Becerra, London Breed and Karen Bass are all reportedly being considered by Gov. Newsom
WLS
By Alix Martichoux 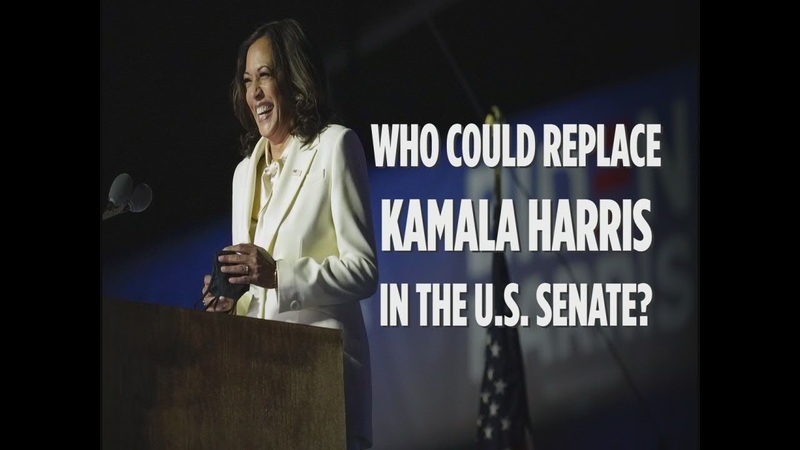 Who will replace Kamala Harris? These are top contenders

SAN FRANCISCO -- Sen. Kamala Harris is getting a big promotion, set to be the next vice president and the first woman to hold the job. That leaves Gov. Gavin Newsom with a big task: filling her job.

The California governor gets to pick Harris' replacement -- and it's a coveted job. Who's in line for the senate seat?

Sen. Harris is the only Black woman in the U.S. Senate, so there's some pressure on Newsom to pick another Black woman (you'll see a few on the list below), or at the very least a person of color.

Here's what we know about some of the top contenders.

The San Francisco mayor received national attention for her handling of the early coronavirus pandemic, when the city and much of the Bay Area were the first in the nation to announce a shelter-in-place order. She also joined protesters over the summer in the wake of George Floyd's death and cut the city's funding to the police and sheriff's department, reinvesting that $120 million in the Black community.

Barbara Lee has represented Oakland and its surrounding cities in Congress since 1998 and has always been one of the body's most progressive members. She was notably the only member of the House to vote against the use of military force after the September 11 attacks.

Another Bay Area member of congress, Khanna represents Silicon Valley. He was a vocal supporter of Sen. Bernie Sanders in the 2020 presidential campaign. When ABC7 News asked him if he'd like to fill the soon-to-be-open Senate seat, he demurred. "I think there are a lot of great people out there, but I what I hope is that the governor picks someone clearly with progressive views," said Khanna.

Karen Bass represents part of Los Angeles County in Congress and is chair of the Congressional Black Caucus. She was reportedly on the short-list as a contender for Joe Biden's running mate, but perhaps him picking Harris opens another door for Bass.

The Oakland mayor of two terms is also being considered, reports Politico. "I am feeling so hella proud of Kamala Harris," she told ABC7 News over the weekend while she celebrated the Biden-Harris victory near Lake Merritt.

Becerra could follow in Harris' footsteps going from Attorney General of California to U.S. Senate, if he's picked by Newsom. Before becoming A.G. he represented Los Angeles in the House of Representatives.

Padilla has remained a steady force as Secretary of State, overseeing an election unlike any other. Padilla worked with Newsom to send every registered Californian a mail-in ballot amid the coronavirus pandemic, and repeatedly assured people voting by mail was the safest method in 2020.

Schiff, who represents part of Los Angeles County, made a national name for himself (and landed himself on the president's bad side) when he led the impeachment hearings as chair of the House Intelligence Committee. Before being elected to Congress, Schiff worked in the U.S. attorney's office in Los Angeles.

The Long Beach mayor would be the first openly gay Latino senator from California, if he were picked. Before holding local office, he was a college professor.

The Orange County Democrat is seen as a rising star in the party. She recently went viral for calling out a pharmaceutical CEO in a House hearing for raising cancer treatment drug prices while receiving a large bonus.

"Kamala Harris: To Be The First" details her journey of hope from Berkeley to Washington, where she will soon begin a new chapter as the first Black and Asian woman elected vice president of the United States.