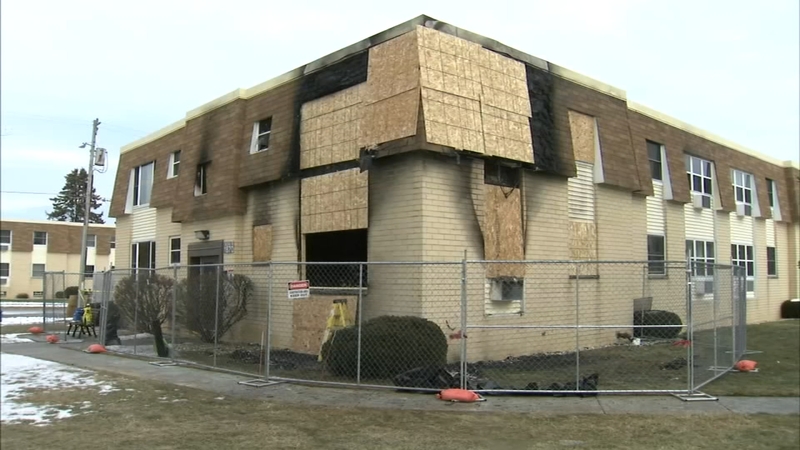 KENOSHA, Wis. (WLS) -- Three people were killed and four were injured after a fire at an apartment complex for senior citizens in Kenosha Monday night, Wisconsin officials said.

Kenosha Fire Chief Kenneth Schroeder said the blaze broke out about 9:30 p.m. at the 16-unit complex known as the Saxony Manor Apartments, located in the 1800-block of 22nd Avenue.

It was brought under control in about 30 minutes.

Officials said two people were found dead on the scene, and one later died at a local hospital due to injuries suffered in the fire.

A man and a woman were killed in the fire. No other identifying information was immediately provided.

A Kenosha police officer was also injured while trying to evacuate residents. The officer suffered smoke inhalation but is expected to be OK.

"Had it not been for the rapid response and evacuation efforts by the Kenosha Police Department there would likely have been more injury or death," officials said.

One person remained unaccounted for Tuesday, but they were not believed to have been in the building. At least a dozen residents have been displaced.

The fire's cause was not yet known Tuesday, and the building was boarded up and fenced off.

One man said the fire spread so quickly, he didn't have much time to knock, but he did the best he could.

Cell phone video captured the ferocious flames shooting into the night sky, as Kenosha firefighters tried to rescue anyone left inside in the bitter cold.

The entire building was filled with toxic smoke, and the west side was consumed with flames, officials said.

"Shouldn't do that, you're supposed to get out, but, I hate to use the word instinct, but you just can't leave when you know there are other people there," he said. "I stepped outside, and there was smoke coming out of the first apartment. I immediately hit the fire alarm, and there was an alarm going off."

Another neighbor, Rosie Price, called it a "tragedy."

"It's hard when you lose people like this," she said.

Some neighbors said they know the woman who lives in the first-floor apartment, and they haven't been able to get in touch with her.

"It was horrible, horrible because I did know the lady, but I know she doesn't get around that well, and I was worried about everybody," Price said.

Residents were still in disbelief Tuesday morning, praying for the victims.

"I mean it's just awful. Some of these women and men, you know they're disabled, and they can hardly move, and it's just an awful thing, I think," neighbor Debbie Pharr said.