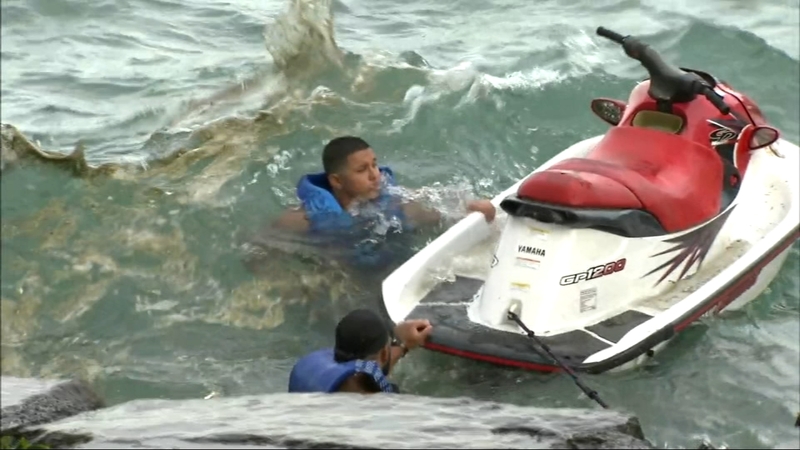 CHICAGO (WLS) -- Dangerous conditions are expected to continue on Lake Michigan Monday, after the water's rough waves were responsible for at least two drownings this weekend.

A beach hazard alert remains in place through Monday due to rains and strong winds that will whip up waves up to 6 feet high.

Emergency crews raced to 63rd Street beach Sunday after reports of two men in Lake Michigan who were thrown from their jet skies. The incident occurred while a swim ban issued by the city's Park District was underway for 25 Chicago-area beaches.

Luckily, Natalia Lopez, 9, spotted the men struggling in the choppy water and called for help.

"I saw two men, two men struggling to get out of the water. The waves were high," Lopez said.

But earlier this weekend, a man in Waukegan was thrown from a jet ski and pulled out of Lake Michigan in critical condition. He was later pronounced dead at a nearby hospital.

No one else was hurt. The victim's name has not been released.

On Sunday morning, two men, ages 26 and 35, were pulled out of Lake Michigan by the Chicago Police Department's Marine Unit shortly after they jumped into the water in Lincoln Park on the North Side. The 26-year-old was rescued in critical condition and later died at a hospital.

"We've been on a record pace this whole summer," said water safety expert Dave Benjamin, who tracks drownings in the Great Lakes. "When we're comparing Lake Michigan on this date in 2018, we had 27. Today, we have 35."

High water levels this summer have made an already dangerous Lake Michigan even more so. Last Thursday, 35-year-old Rene Padilla drowned while trying to save his daughter who was knocked into the water by a large wave after venturing out onto a breakwall at 31st Street Beach.

RELATED: Man who died in Lake Michigan was trying to save daughter, 12, who slipped on rock
"I told him yes, take a vacation because the girls are going back to school and he wanted to spend one day with them," said Bob Spagnolo, Padilla's boss. "It's not right."

Chicago Fire Department officials said unfortunately 40-60% of all drowning victims are "would be" rescuers. Drowning is one of the leading causes of accidental death in the United States.