2 cases of Legionnaires' possibly linked to University of Chicago Hospital 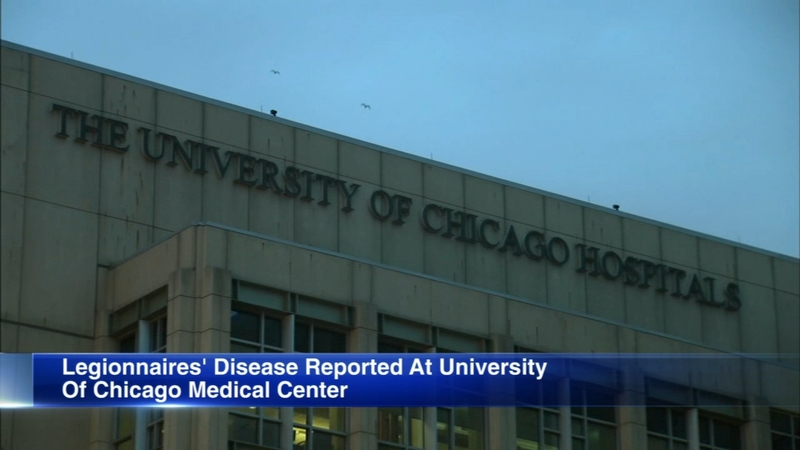 2 cases of Legionnaires' reported at University of Chicago Medical Center

CHICAGO (WLS) -- For the second time in a week, state health officials said Chicago hospital patients had been diagnosed with Legionnaires' disease.

The Illinois Department of Public Health has identified two new cases of the potentially-deadly lung infection, which is contracted by inhaling aerosolized water containing the Legionella bacteria.

Both infected individuals were recent patients at the University of Chicago Medical Center, but it's unclear if they contracted the illness at the Hyde Park hospital. UC officials said extensive water system testing found no evidence of Legionella at the facility. IDPH has not determined the source of the infection.

IDPH said the infected patients had also received treatment during the potential exposure period at other medical facilities but declined to identify those locations.

On April 26, IDPH said two different patients at another south side medical center, Mercy Hospital, had also been diagnosed with Legionnaires' disease. Water testing at Mercy came back positive for Legionella, officials said. The facility has since flushed its water system.

We take Legionella and its potential health concerns seriously and are working with state and local health authorities, as their investigation continues to find the exact source of the bacteria inside or outside our health system. To be clear, these patients were in our facilities for only a portion of their risk period, and none of our water tests has revealed Legionella. We do not have any information about water testing at other sites these patients may have visited during the risk period."
Report a correction or typo
Related topics:
health & fitnesschicagonear south sidehyde parklegionnaires' diseasehospital
Copyright © 2022 WLS-TV. All Rights Reserved.
TOP STORIES
4th of July fireworks displays across Chicago area | See full list
40 shot, 7 killed in July 4 weekend violence since Friday evening: CPD
Girl, 6, critically injured after struck by teen riding electric bike
Jayland Walker was unarmed when 8 Ohio officers opened fire on him
CPD suicide: Officer ID'd by medical examiner
31 bodies, some decomposing, found at Indiana funeral home
647 people drown each day. Here's how to avoid being one of them
Show More
Man charged with shooting, killing high school student on SW Side
Couple gets $1.5K fine for parking in their driveway
Waukegan 4th of July parade returns in-person, honors first responders
Thousands of dead anchovies wash ashore, fall from sky in California
3 dead, 3 critically wounded in Copenhagen shopping mall shooting
More TOP STORIES News