CHICAGO (WLS) -- Tens of thousands flocked to Grant Park Sunday for the last day of Lollapalooza. Arcade Fire closed out the Grant Park stage and Justice headlined the Bud Light stage on either ends of the festival on Sunday night.

After four days of music, dancing and lots of memories, Lollapalooza came to an end as the weather turned out better than expected.

Authorities say through the first three days of the festival at least 185 people were taken to hospitals for treatment.

Police say they arrested about two dozen people for thefts, battery, trespassing and narcotics.
Saturday, thousands of people gathered in Grant Park on a dry and comfortable day weather wise.

Chicago's own Chance the Rapper took the stage Saturday to a large crowd that enjoyed every moment.

"It's great being with my friends and doing it. Alone would be like boring, but with them it's so much better, just having a lot of fun, making a lot of good memories," said festivalgoer Jake Ryan.

Malia Obama, daughter of former President Barack Obama, was spotted at the festival on Saturday. 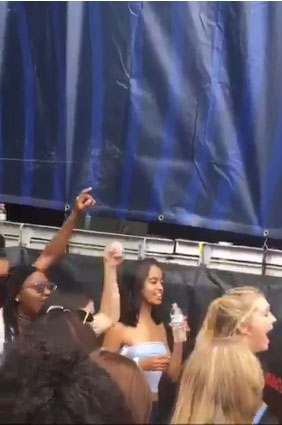 Police said they have made an arrest after cell phone thefts at Lollapalooza. Officers found 60 stolen phones on one person and that person is under arrest.
What can you expect on day four? Spotty showers all day Sunday and cooler, with a high in the 70s.

More than 170 performers will hit eight stages at this year's four-day music fest. CLICK HERE for the full concert schedule.

Gates open Sunday at 11 a.m. Festival-goers will need wristbands to get in and will be subject to a security screening. Large bags are prohibited and all bags will be searched. Attendees can re-enter up to three times per day.

CLICK HERE for additional information on allowed and prohibited items, as well as tips for attending Lollapalooza.