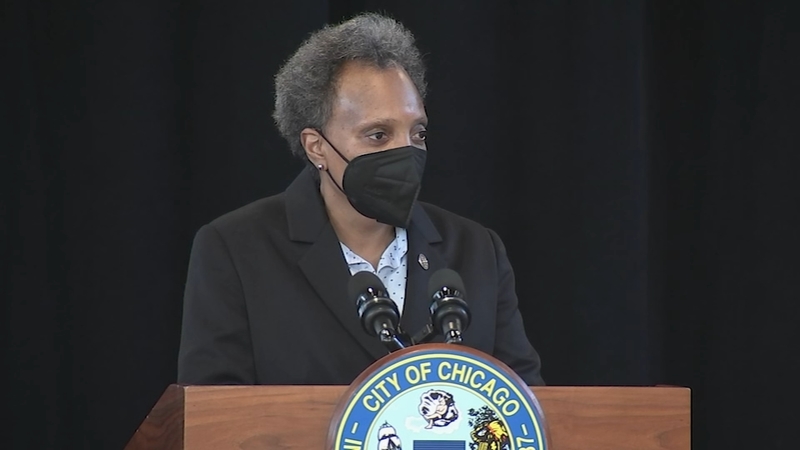 CHICAGO (WLS) -- Mayor Lori Lightfoot returned to public events Tuesday for the first time since testing positive for COVID a week ago.

The mayor was on the Southeast Side to announce a series of community investment projects after recovering from the virus.


"My symptoms were relatively mild, kinda felt like a cold, a bad cold," she said.

Lightfoot, who usually removes her mask while speaking at events, kept hers on Tuesday to comply with CDC guidelines for mask wearing for 10 continuous days after contracting COVID-19.

She is traveling to Washington D.C. for the U.S. Conference of Mayor's winter meetings, and said she consulted with CDPH director Dr. Allison Arwady, who cleared her for travel.

Lightfoot also offered an encouraging assessment of the current COVID surge, saying the numbers are beginning to trend downward.

"I think we're seeing a peaking of this surge, but with a lot of caveats and caution," the mayor said.


Despite that, Mayor Lightfoot said she does not anticipate removing the proof of vaccination requirement for restaurants anytime soon.

As she mulls running for reelection, which she has not officially declared, Lightfoot deflected a question about her political future and defended her fundraising, that only netted about $540,000 in the last quarter of 2021.

"I believe in being prepared. When you look at what we've done, particularly with fundraising over the last year, it's heading in the direction, a particular direction, but I'll save the specifics for later date," she said.