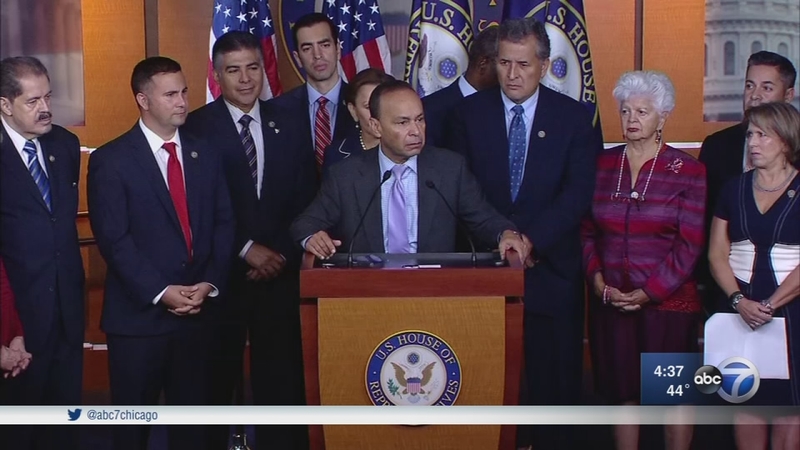 Luis Gutierrez may be testing waters for 2020 presidential run

CHICAGO (WLS) -- A day after longtime congressman Luis Gutierrez said he was retiring from Congress it appears he may have his sights set on the presidency.

Gutierrez, who has represented Illinois' 4th Congressional District since 1993, dodged questions about his future plans Wednesday.

It seems certain Gutierrez is testing the waters for a 2020 presidential run, and not running for reelection to the House of Representatives in 2018 gives him an opportunity to raise his national profile. But where he writes the next chapter of his career will depend largely on what happens during the next two years.

"I'm staying in the fight, I'm just going to take that fight to a different arena," Gutierrez said.

If he's planning to make that next arena the presidential campaign trail, Gutierrez isn't ready to say. But in announcing that he was not running for reelection he did not rule out a run for another office.

Jesus "Chuy" Garcia, who Gutierrez anointed as his successor, thought the next step seemed pretty clear based in part on Gutierrez announcing plans to travel the country with his wife next year, something that would help raise his national name recognition.

"I thought he said it to all of us, it sure sounds like he's got big plans and I wouldn't rule (a presidential run) out," Garcia said.

But Garcia also said Gutierrez did not say specifically that he was looking to run for president.

"No, I've come to my own conclusion that he probably will," he said.

"He's gone from taxi driver to Congress, I think he can do anything that he puts his mind to," said Sylvia Puente, executive director of the Latino Policy Forum.

Puente said Gutierrez will be looking to build his base nationally.

"So I think he certainly has to appeal to go beyond the Latino community, and really make his pitch directly to the working people of America in terms of what we all want for a better future for America," she said.

"It's going to be very hard for Congressman Gutierrez, particularly when it's not Congressman, to be able to raise the necessary resources to be a serious candidate, a frontier candidate," said Professor Dick Simpson, University of Illinois at Chicago.

Simpson and others believe Gutierrez might have a better shot at being on the ticket as a vice president.

But politics is full of surprises.

"Of course, we didn't think Trump could be elected president, so you can't be sure," Simpson said.

If Gutierrez were to come up short in a run for the presidency and not get picked as a vice presidential running mate in 2020, there's a very good chance he could get a cabinet post if a Democrat wins the presidency.