'Headlock Him Up': Hundreds protest President Trump outside UFC Fight at the Garden 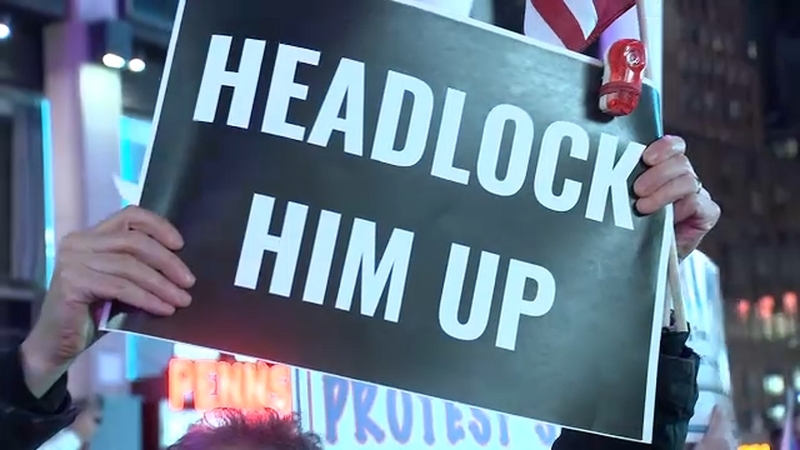 'Headlock Him Up': Hundreds protest President Trump outside UFC Fight at the Garden

MIDTOWN, Manhattan -- President Donald Trump took a break from battling the Democrats' impeachment inquiry to watch another bloodsport Saturday, drawing a mixed response at a UFC match at a raucous Madison Square Garden.

The President had seats on the floor. Sitting on one side of him was House Minority Leader Kevin McCarthy. On the other side of him were his sons, Donald Jr., and Eric.

Hundreds of people protested outside the Garden, shouting things like 'lock him up.'

Some also held signs reading 'headlock him up' - a reference to the UFC fight he came to watch.

The greeting, though split, was warmer than the reception Trump received earlier in the week, when he was roundly booed and faced a "Lock him up!" chant at a World Series game he attended in Washington.

Though a bloody mixed martial arts fight may be an unusual venue for a president, Trump has longstanding ties to the UFC and sat just a few rows from the cage, where fighters took turns bloodying each other with a variety of kicks and punches.

He was set to sleep in his former penthouse Saturday before leaving town Sunday morning, his motorcade certain to add to the traffic congestion anticipated that for the New York City Marathon.

The President's visit to the city came just 48 hours after he switched his residency from Manahttan to Palm Beach, Florida.