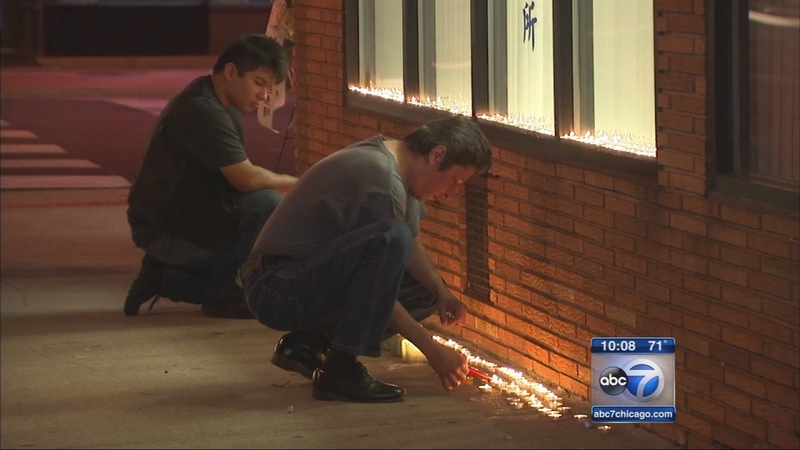 CHICAGO (WLS) -- The Malaysia Club of Chicago remembered the passengers of Malaysia Airlines Flight 17 shot down over Ukraine. Candles were lit Friday night to honor the lives lost.

Flight 17 was four hours into its journey from Amsterdam to Kuala Lampur when it was shot down over Ukraine. All 298 people aboard the Boeing 777 perished.

There are an estimated 1,000 Malaysian Americans in the Chicago area. The close-knit community came together for the vigil Friday night on the corner of Wallace Street and West 31st Street in the city's Bridgeport neighborhood.

"This is not only a tragedy for the Dutch, the Malaysians, but a tragic moment for humanity," said Sue Christensen, Malaysia Club of Chicago.

Members spoke of the multicultural, multi-denominational population of Malaysia. Those of Malaysia descent here Friday evening didn't know any of the victims personally, and yet they mourn.

Among those who joined in prayer Friday night were some Ukrainian Americans.

"I wanted to be here today to support the Malaysians, and to support anyone who lost any family," said Lydia Tkaczuk, Ukrainian National Museum.

"It's actually 9/11 for Netherlands, for Malaysia, for Ukraine. Another 9/11, another reminder that the terrorists can attack you at any time," said Louri Melnik.

"I want to thank everyone for coming out, to help us through the grieving, mourning during this difficult time," said Dr. Tee.

Dr. Tee says there may be one victim, a flight attendant, on board that flight that may have had past connects to Chicago. His nephew, sadly, is also grieving.

"His friend was on the flight and evidently didn't make it, it's so sad," said Dr. Tee.

He says many local Malaysian families did know people on the flight and hopes the vigil brings everyone closer.

"I'm hoping the entire community and all the Asian American community and the general public will come together and have a candlelight vigil of the 295 lives that just vanished instantly," said Dr. Tee.

A number of nationalities have yet to be identified. The passengers whose nationalities have been confirmed hail from several countries, including Indonesia, Australia and Malaysia. The majority of those killed were Dutch nationals.

On Saturday, another vigil is planned for 2 p.m. near the old Water Tower on Michigan Avenue.

There is also an online condolence register.