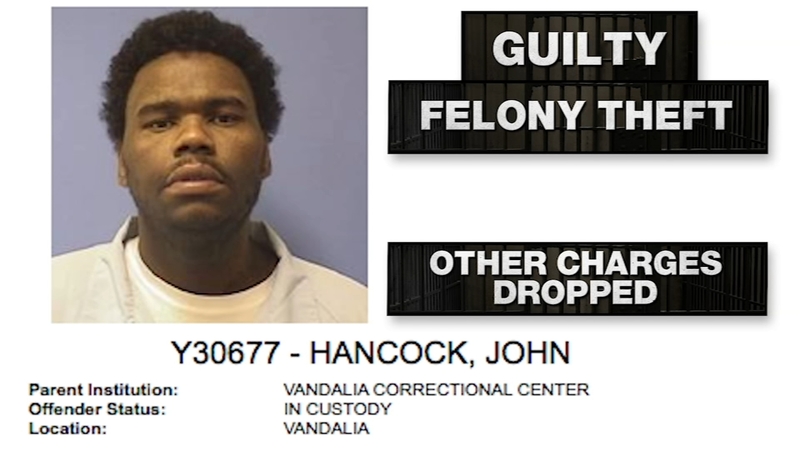 John Hancock was accused of swindling an art gallery owner and using fraudulent credit cards to rip off a high end department store.

Now, the I-Team has learned that Hancock has pleaded guilty to one count of theft and he's in prison.

John Odell Hancock has a prison profile. The 6 ft., 285 lbs. man now sits behind bars at the Vandalia Correctional center in downstate Illinois.

He recently pleaded guilty to one count of felony theft but all other charged were dropped.

When he was arrested on a warrant in January, he faced six different charges which included theft and unlawful forgery of a credit card at several high end merchants... and there were other accusations.

"I think it's fairly amazing that someone would come in here and defraud me to get art," said art gallery owner David Leonardis.

Wicker Park art gallery owner David Leonardis filed a police report against Hancock in September. He showed the I-Team a picture of Hancock posing for the camera with paintings that he put on a credit card.

But Leonardis said after the purchase, Hancock told his credit card company he never got the art and wanted the payment stopped. That's known as a fraudulent "charge-back."

Hancock was shopping while avoiding an earlier arrest warrant on him for a probation violation. He had previously pleaded guilty to stealing IDs and in this crime caught on camera, forging credit cards to buy thousands of dollars' worth of belts and shoes from Neiman Marcus.

"I was not certain it was a good transaction and I made the right decision to not let the product go out the door," said Jon Lind, owner of J.C. Lind Bike Company.

Old Town bike shop owner Jon Lind says he thwarted Hancock from walking out with $10,000 in bikes. Lind believed Hancock tried to use a stolen credit card to fool him.

Hancock was sentenced to three years behind bars, but he could have a parole hearing as early as next July.