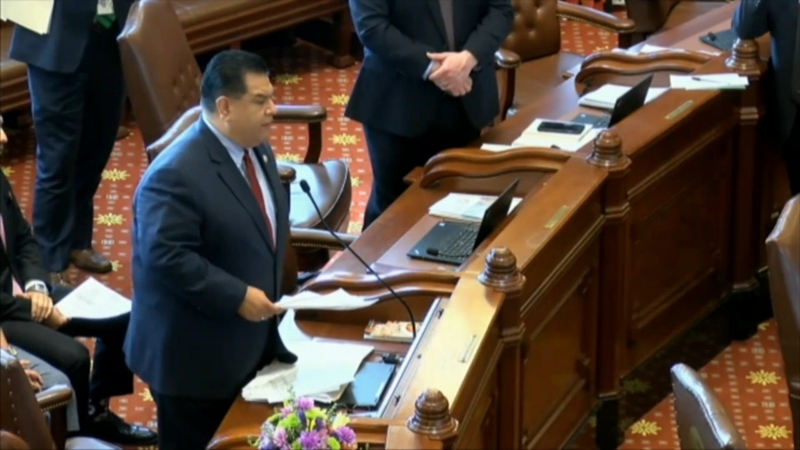 SPRINGFIELD, Ill. (WLS) -- Former state Sen. Martin Sandoval has been charged with one count of bribery and one count of willfully filing a false income tax return,according to court documents filed Monday.

Sandoval, 56, was charged in what is called a criminal information, which indicates he plans to plead guilty and cooperate on possibly other political corruption cases.

"This kind of behavior, this kind of activity is utterly repellent," Illinois Governor JB Pritzker said. ""It's not only the job for the federal government ts aj on for the state of Illinois, we need to pass new ethics legislation, we need to go after these people scare them off so they don't make a buck for themselves."

Prosecutors said Sandoval, former chairman of the Senate Transportation Committee, received money in connection with continued support for the operation of red light cameras in Illinois, "including opposing legislation adverse to the interest of the red-light camera industry."

While no company is named in the charges, Sandoval's relationship with the red light company SafeSpeed has been reported.

A statement from SafeSpeed reads in part: "We are saddened and surprised by the allegations that Sen. Sandoval sought out individuals to solicit and receive bribes."

Meantime, Sandoval is likely to cut a deal with the feds, which legal experts said means he is cooperating on other cases.

"He is an important person who has touched a lot of political figures over the years. It will be interesting in what he says," former federal prosecutor Jeff Cramer said.

One of Sandoval's closest allies in Springfield was House Speaker Micheal Madigan.

Besides the governor, other state democrats are also demanding ethics reforms.