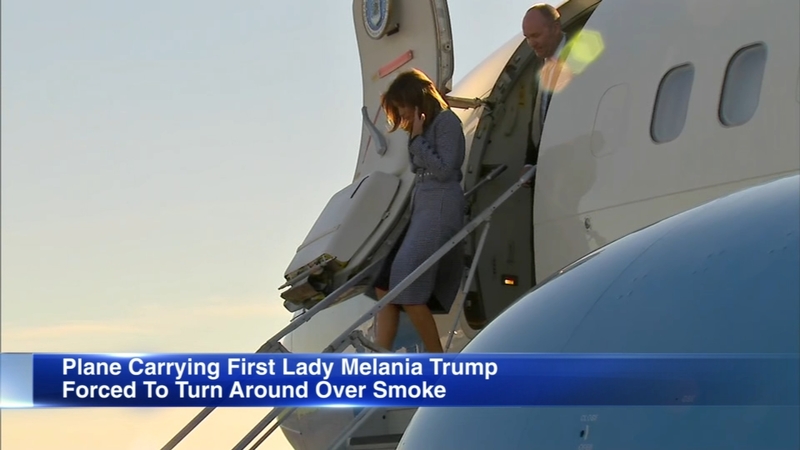 PHILADELPHIA -- First lady Melania Trump's plane has landed in Philadelphia after being forced to return to a Washington area military base on Wednesday because of smoke in the cabin.

Her spokeswoman, Stephanie Grisham, said "everyone is fine and everyone is safe" after the plane returned to Joint Base Andrews.

Mrs. Trump was scheduled to visit a Philadelphia hospital and meet with families of children affected by exposure to opioids while in the womb.

According to TV reporters traveling with the first lady, the flight was in the air about 10 minutes when smoke filled the cabin, and then Secret Service agents rushed to the front of the plane.

The smoke originated from communication equipment in the front of the plane, according to a statement from the Air Force.

The first lady and all passengers were safe, according to the Air Force's statement. Mrs. Trump's travel was delayed by about 90 minutes.

The event was planned for Thomas Jefferson University Hospital, where Health and Human Services Secretary Alex Azar was to join the first lady. The hospital has provided care to mothers with opioid use disorder and their newborn children for more than 45 years.

Mrs. Trump toured a neonatal intensive care nursery and spoke at an HHS conference on a new system that tracks infants suffering from opiate withdrawal.

The first lady's visit was one stop as she promotes her "Be Best" campaign, which focuses on issues affecting children, including the importance of healthy pregnancies.

Raw video from first lady Melania Trump's plane after it was forced to return to Joint Base Andrews on its way to Philadelphia on October 17, 2018.