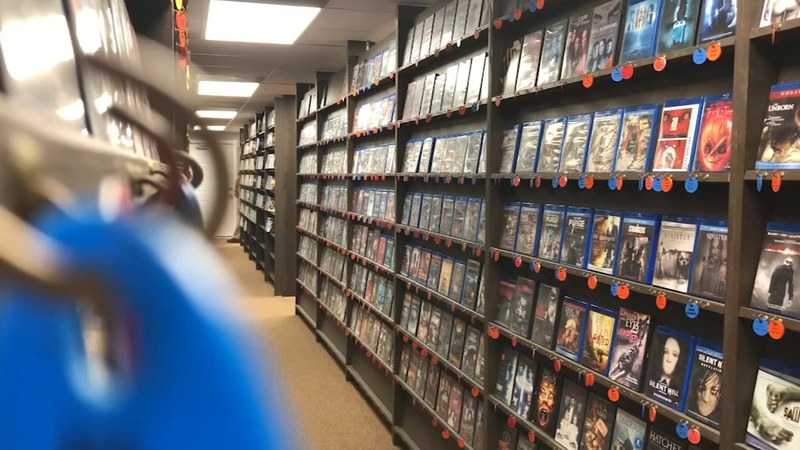 MOKENA, Ill. (WLS) -- In 1985, Bob Braeunig was looking for a new business venture. He wanted to open a record store, but the more he researched the less potential he saw. But video stores were on the rise, and so he took a chance on the movie business. Thirty-four years later, he's still doing things the old-fashioned way.

Mokena Video opened its doors in November 1985 in a small property at Wolf and Front in downtown Mokena. Braeunig started with 650 VHS video tapes and a small "new releases" wall, and within a short time saw his collection grow to more than 1,000 tapes.

"The 'hey day' for this store was probably '92 to about '98," he recalled. "People would stand at the new release wall waiting for something to come back. They would stand there an hour."

"I still remember 'Die Hard,'" he added. "That movie came out like January, February and it was June and it was still renting."

And, he says, people still rent the VHS tapes.

"Some people, they come in here, they see some movies they'd like to rent, and they go to a secondhand store and buy a VCR and come back and rent movies," Brauenig said.

Mokena Videos' rental system will be familiar to anyone who used to go to Blockbuster: empty VHS cartons line the shelves and are exchanged for the real deal at the register. For new movie formats, a token system is used. Circular discs hang on the shelves, blue for BluRays and orange for DVDs. Bring the disc to Brauenig and he'll head to the back room to grab your movie.

The process at the register is similarly old school. Nothing at Mokena Video is computerized. Instead, Braeunig has a collection of 3"x5" paper notes with his customers' names, phone numbers and video selections. He said he's able to memorize most of their information.

"Somebody rents a movie, I take a slip, I write their name," he said.

Changing technology and, especially, the rise in streaming services have dealt blows to Mokena Video over the years. Braeunig has had to downsize properties, but through his struggles the community around the video store grew.

"This store has almost bit the dust a couple times," Braeunig said. "And a customer by the name of Margaret started a GoFundMe."

"You can't get what you get here at Redbox, at a Netflix, at a Hulu," Margaret Foy said. "We don't need places like this to go out of business."

Foy said she's been coming to Mokena Video for the last 15 years.

"It brings me back to being 8 years old and picking out my first horror movie," she said with a laugh. "I think the first one I rented from here was 'Rest Stop.'"

Word of Foy's GoFundMe spread quickly, and support poured in.

"As soon as she did that, the word got around really fast and eviction was averted," said Braeunig. "She probably helped in a big way to save this store."

Brauenig said he's been exploring business opportunities to help keep the store afloat, including adding a Door Dash service so people can use a new app to embrace old technology. But even with the financial risks, he sees no reason to change what he's doing.

"A man with more vision would have seen how much he could get for all these movies, or sell the store outright," he said. "This was such a part of my life that I didn't want to let it go. You know, I virtually open the door and my friends come in all day long."

The bond between Braeunig and Mokena Video and the community around them runs deeper than simple movie rentals.

"I mean, some of my customers I've known since they were little kids," he said. "They will say, 'Don't ever close, I'm so glad you're open, don't close.'"

Braeunig said he feels blessed to be in business and to be as loved by the community as he is, and hopes to continue for years to come.