Morton Grove woman died in daughter's arms after being struck by car: 'I saw her floating in the air' 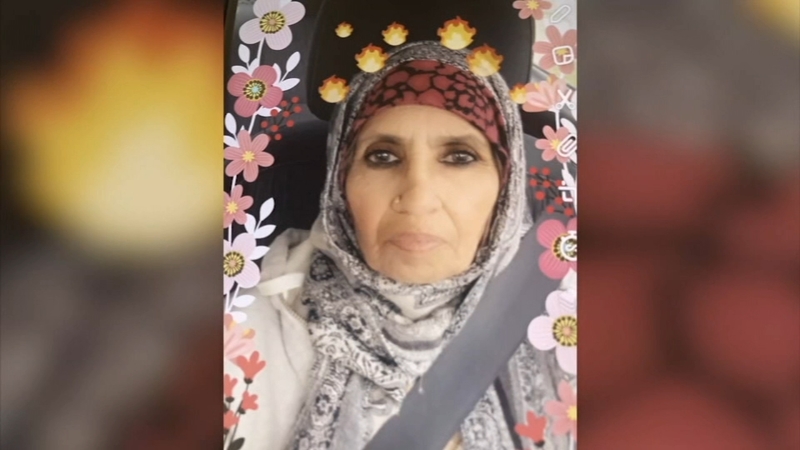 MORTON GROVE, Ill. -- The daughter of a woman struck and killed by a car in Morton Grove Tuesday night spoke exclusively to ABC7 Eyewitness News about the crash as the family struggles with their grief.

"I saw her floating," Ayesha Ahmad, her daughter, said through tears. "I don't know how high she flew in the air and then she fell. And the person... nobody helped me."

Ahmad said she had left work to pick up her mother, who was walking home after leaving her job at a nursing home. Ahmad said she parked her car near Lincoln and Grove around 8:20 p.m., looked both ways and then told her mother it was OK to cross the street.

"I waited for 30 seconds and there was no car coming from the back or from the front," she said. "I got out of my car and I was like 'you can come now,' and she said OK."

"She had put one foot down on the street," said Jimmy Samad, victim's nephew. "By the time she put the second one a car came zooming toward her, hit her."

The daughter of a woman struck and killed by a car in Morton Grove Tuesday night spoke exclusively to ABC7 Eyewitness News about the crash as the family struggles with their grief.

As the driver sped off, Ahmad rushed to her mother's side, but she could do nothing to help her. Khanem was dying in her daughter's arms.

"I put my hands under her head," Ahmad said. She said her mother was repeating an Arabic phrase that means "There's no God but Allah."

When she called 911, Ahmad said she panicked.

"I was on with the guy for like 30 seconds and he put me on hold and said 'stop screaming' when my mom was about to die. How can I stop screaming?" she wondered.

Ahmad said the situation became more complicated when she was kept from her mother's side because, at first, responding officers mistakenly thought she was the motorist responsible for the tragedy.

"What she told us, they thought she was a suspect and she was being questioned in lieu of being allowed to go in the ambulance, go with her mom to the hospital," said Samad, victim's nephew. "Be with her mom in their last hours, last minutes."

Khanem was pronounced dead at the hospital from her injuries.

Police and family said the driver turned himself into law enforcement Wednesday. Police said that because the driver came forward so quickly, they are no longer classifying the crash as a hit-and-run.

"For the driver to turn himself in he's required to provide medical attention, come back to the scene," Samad said. "He sped off. We'd love to see what the records actually show."

Wednesday afternoon the close-knit family of Pakistani immigrants came to the Morton Grove police station looking for answers as they try to heal.

"When I close my eyes or I open my eyes I heard something, I hear a click, and I see my mom still floating in the air," Ahmad said.