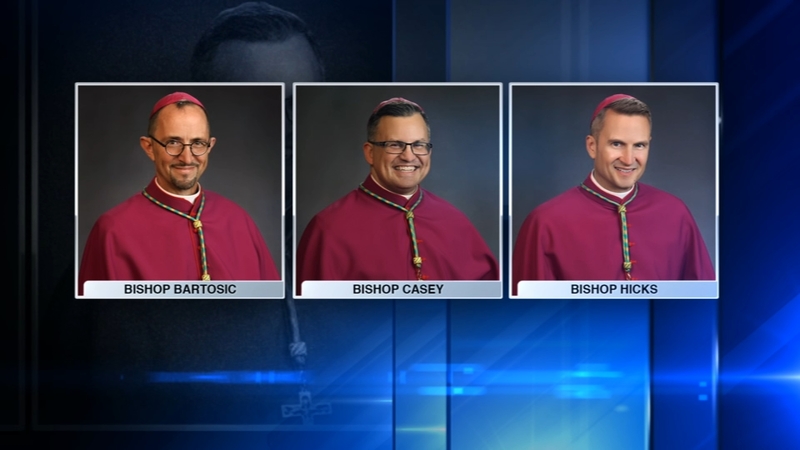 CHICAGO (WLS) -- Three new bishops were ordained Monday at Holy Name Cathedral in Chicago in the presence of 26 of their now-peers and over 200 priests.

It was a moment of celebration for the Archdiocese of Chicago, but one that by Cardinal Blase Cupich's own admission, comes at a moment of "great shame for the Catholic Church."

"We the leaders of the church whose failings are on full display these days, are like Solomon. We come here today as beggars in need of wisdom," Cupich said in his homily.

The new bishops are Mark Bartosic, Robert Casey and Ronald Hicks. Casey and Hicks were both born and raised in Chicago.

Their elevation is under greater scrutiny as it comes in the wake of a recent Pennsylvania grand jury report that says 300 "predator priests" abused more than 1,000 children over the past seven decades.

And while none of the new bishops have been convicted of such crimes, Casey was briefly removed from ministry in 2008 as pastor of Little Village's Our Lady of Tepeyac as an allegation of misconduct was investigated by the Department of Children & Family Services (DCFS). That allegation was later dismissed.

Neil Skene, a DCFS spokesperson, said Monday they have not located the relevant files but added that "an unfounded investigation from 10 years ago probably would be expunged."

Cupich did not address the specific investigation on Monday. However, he tackled the issue of sexual abuse in his homily.

"In this moment of great shame for the Church, the poorest among us are the victim-survivors of clerical sexual abuse," Cupich said. "The bravery and courage they have shown have challenged a complacency that for many decades ignored the pain of a child, and was shamefully more preoccupied with institutional self-protection and image."

Casey most recently served as pastor of St. Bede the Venerable Church in Chicago's Ashburn neighborhood.