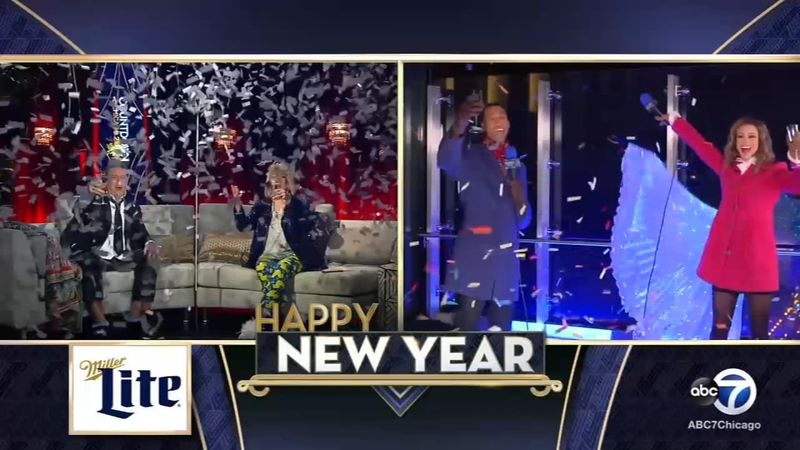 CHICAGO (WLS) -- As we look forward to bidding farewell to 2020, ABC 7's New Year's Eve special, a Chicago tradition for the past 29 years, will carry on the celebration! Countdown Chicago, the city's longest running and most popular local New Year's Eve show, will once again ring in the New Year on Thursday, December 31 at 11:25 p.m.. December 31, 1991 marked the beginning of ABC 7's annual broadcast of New Year's Eve specials.

Countdown Chicago was one of the most watched local programs in Chicago in 2020 and this year won't be an exception! ABC 7's Janet Davies and Mark Giangreco, two of Chicago's most recognized broadcasters, will team up for their 20th stint as co-hosts ushering in the New Year for Chicagoans. Janet and Mark will host from a re-imagined and festive Windy City LIVE studio, showcasing exciting entertainment for some NYE magic. Also, joining the celebration are ABC 7's Ryan Chiaverini, Liz Nagy, Hosea Sanders and Val Warner.

Terrell Brown and Cheryl Scott will open the show with another smash dance routine guaranteed to shake off the 2020 pandemic blues. And since laughter is the best medicine for a year like 2020, Countdown Chicago will feature comedians and radio personalities -- including Chicagoan Ed Lover, Jo Koy, Damon Williams, Erica Watson, Brian Babylon, Peter Lee, Angi Taylor, Kendra G & Kyle Santillian -- who remind us, in a very humorous way, just how bad 2020 was!

Singer/Actress Sofia Carson turns in an exclusive performance for Countdown Chicago, singing her hit song, "Guess I'm a Liar." Carson is starring in the new film, "Songbird." She is also known for her role as Evie in the Disney "Descendants" series, as well as Ava in Freeform's "Pretty Little Liars: The Perfectionists."

Chicago native and finalist on "The Voice," Katie Kadan will perform an upbeat cover of "Lady Marmalade" she has done in the past as well as an original song from her eponymous album.

Here's a behind-the-scenes look at Countdown Chicago 2021 on ABC7.

Then in perfect harmony, the unmatched sound of DCapella will delight and amaze.

Ryan Chiaverini is putting together a special "2 Minute Warning" featuring the people of Chicago who tell us in their own words what was "Wacky, Weird & Wild" in 2020.

Liz Nagy will talk to Katie Kadan from the Baton Show Lounge about the struggle of artists during the pandemic as well as Katie's amazing run on "The Voice."

Hosea Sanders will feature a story on "Watch Night" sometimes called Freedom's Eve, which will highlight a celebration by some Black churches to remember the Emancipation Proclamation freeing slaves.

Val Warner will catch up with Jermaine Jordan, owner of the Free Hot Meals restaurant on the West Side, which provides free meals/clothes/groceries to the homeless. She'll find out what soul food and dessert he's cooking for the homeless. The Bowen High School basketball team will be featured as they cook and pass out special meals at the restaurant on New Year's Eve.

And as always, ABC 7 will be ringing in the New Year with a flashback of Chicago's grand finale NYE fireworks.