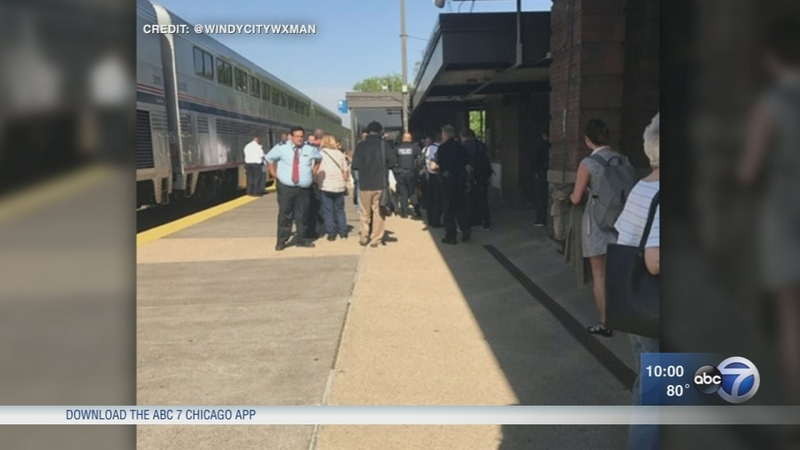 NAPERVILLE, Ill. (WLS) -- A man in his 70s from West Allis, Wis., was taken into custody after allegedly shooting an Amtrak train conductor in the stomach Tuesday afternoon at a Metra station in southwest suburban Naperville.

"Amtrak people crying and they come on the intercom announcing if anyone is a medic or has medical training to come. He sounded out of breath when he was asking," said Vickie, a passenger.

Investigators said the suspect fired from his seat inside the train, through a window, striking the 45-year-old conductor from south suburban Homewood. The conductor had just stepped off the train. The gunman was held by passengers until police arrived.

"We do not know any motive at this time or reason why it happened. We know that the conductor stepped out onto the platform and the suspected reached out a window and fired at him," said Cmdr. Louis Cammiso, Naperville Police Department.

Investigators said they do not believe the suspect and the victim knew each other before the suspect boarded the train.

The conductor was taken to a Edward Hospital, Naperville Deputy Fire Chief Andrew Dina said. Police said he was conscious and alert during transport.

A handgun was recovered from the scene. As of Wednesday afternoon, the suspect had not yet been charged.

Amtrak's Southwest Chief, which runs from Los Angeles to Chicago, was running about two hours late when it arrived around 4:45 p.m. at the Naperville station in the 100-block of 4th Avenue.

Amtrak prohibits people from carrying loaded weapons onto trains, but passengers say there is little security screening to prevent it.

"We have a police at Amtrak that enables people to carry unloaded firearms to stations, where they can check them into checked baggage and they're kept separate from the rest of the train, in a locked container," said Marc Magliari, Amtrak spokesperson.

Police said the passengers who held down the suspect may have prevented further violence.

"Without knowing the intent or motive of the suspect, I think it is very important and could have saved some lives by passengers taking that person and holding him for police," Cammiso said.

All inbound and outbound trains were temporarily halted during the Tuesday afternoon rush hour. Many of the Amtrak passengers found alternate transportation to Chicago during the four-hour investigation.