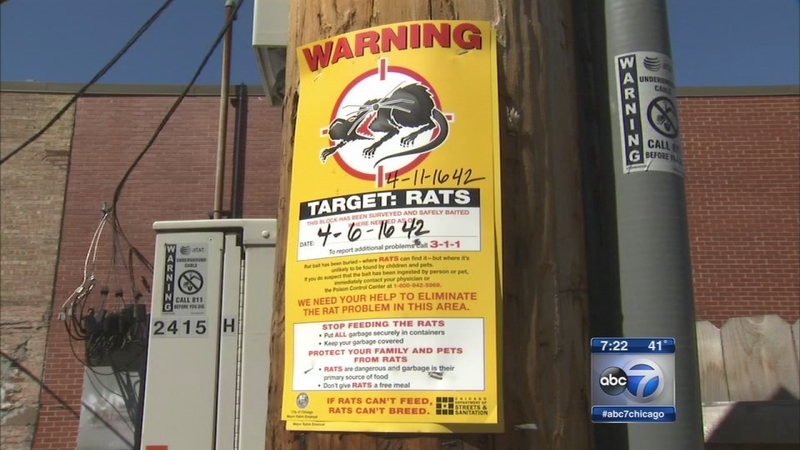 CHICAGO (WLS) -- Some Chicago residents say there's hardly a day that goes by when they don't see a rat.

"Early in the morning, I've seen them running around the alley and occasionally, you see them running across the street," said Jeff Paset, of Lincoln Park.

People all over the city are noticing more of the nasty little critters. That's why the Chicago Department of Streets and Sanitation added 10 more two-person teams to its Bureau of Rodent Control, bringing the total number of crews to 28. The new effort also includes forming a rat task force.

On Tuesday morning, workers baited close to two dozen rat burrows in a single park. Along with these rodent control efforts, homeowners and restaurants are being asked to keep garbage contained inside a closed bin, while neighborhood dog owners are being encouraged to pick up after their pets.

"The number one food source for rodents is dog droppings," said Cmsr. Charles Williams, Chicago Dept. of Streets and Sanitation.

There have already been 6,700 complaints about rats this year, a 67-percent increase over this time last year. And with the demolition of the old Children's Memorial Hospital to start soon, it could get worse.

In November 2014, the ABC7 I-Team looked at the problem after a leading extermination company named Chicago one of the rattiest cities in America. Last year, the city began enforcing a new ordinance requiring developers to have a rat abatement plan.

"Above-ground bait boxes surrounding the perimeter of the site throughout the time that excavation begins until the construction is completely out of the ground," said Ald. Michele Smith (43rd Ward).

If you have a rat complaint in Chicago, call 311. The city says its goal is to address those complaints within five days.