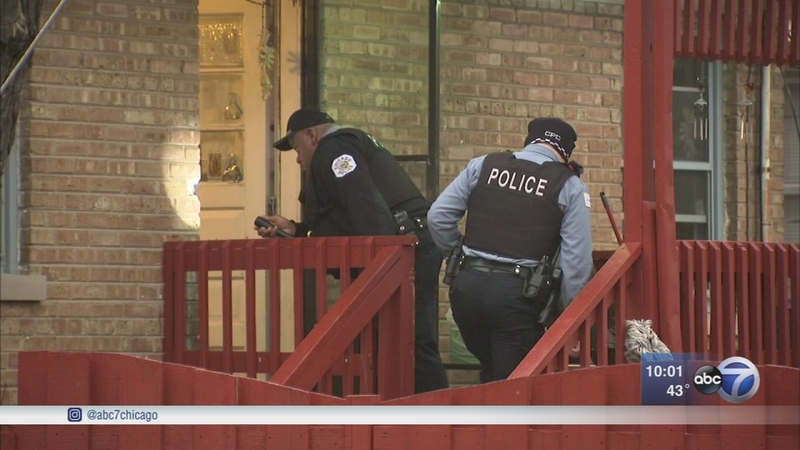 CHICAGO (WLS) -- A man was shot by an Immigration and Customs Enforcement agent in the Belmont Cragin neighborhood Monday morning, the agency said.

Chicago police said a 53-year-old Felix Torres was shot in his left arm the 6100-block of West Grand Avenue at about 6:20 a.m.

A spokesman for ICE said that ICE Homeland Security Investigations agents were attempting to arrest a person when a second person pointed a weapon toward the agents and as a result, an agent fired his gun and wounded the man.

"Really sad and you know, I'm worried about my dad mostly. He's the one in the hospital. And my baby, we come out, like, with no shoes, nothing, we didn't know what was going on, we was sleeping," said Carmen Torres, daughter of the man who was shot.

Torres said ICE agents told her they were after one of her brothers, who is a U.S. citizen. She denied that her father had a weapon.

"My dad doesn't got no guns. My dad just went to see what's going on and that's why they shot him. He just opened the door and they shot him," Torres said.

"Any time an ICE officer or special agent discharges their firearm in the line of duty, the ICE Office of Professional Responsibility reviews the matter. Due to this ongoing review, no further details will be released at this time," the spokesman said.

Tavares also said Torres' adult sons are Americans and the Mexican-American family has lived in the home for years.

"I feel like they're picking on us. That's not cool, cuz we don't do nothing. We're just around. This is where we live," Tavares said.

Torres was taken to Stroger Hospital and where he is in stable condition.

As residents of the home returned to the scene of the shooting Monday night, questions continued to swirl about what brought ICE agents there in the first place.

"Why was, basically, ICE here? What was the reason ICE was here?" asked Rosa Reyes of Communities United.

ICE would not reveal details about the case. Sources told ABC 7 the brother was wanted on a weapons charge.

"If it has to do with a police matter, it has to be the actual police from Belmont-Cragin taking care of the matter, not ICE," Reyes said.

"They're treating our office like we're nobody, so that tells me that I have to talk to the congressmen and the senators to get some answers on this issue, but this is very alarming," said 36th Ward Alderman Gilbert Villegas.

In a statement, a Chicago police spokesman said, "CPD officers did not participate in the federal initiative today but officers responded quickly to the shooting involving the federal agent. CPD will investigate the underlying criminal offense and work in collaboration with DHS and the United States Attorney for the Northern District of Illinois."

Chicago police said they recovered two weapons at the scene, but there are several people living at the home so it is unknown who the weapons belong to.

State Senator Omar Aquino released a statement, saying, "I am saddened and disturbed to hear that a man was shot in the arm by ICE agents this morning in Belmont-Cragin. While it is important to wait for all of the facts, stories like these should make everybody nervous about living in Donald Trump's America. The immigrants that I represent, both documented and undocumented, should be able to contribute to our communities without worrying about government harassment. We must continue to work at the local and state level to protect rights that are under attack at the federal level."

35th Ward Alderman Carlos Ramirez-Rosa also released a statement, saying in part, "My heart goes out to Felix Torres and the eight members of his family terrorized by ICE's early morning guns blazing raid. ICE's guns blazing raid on a northwest side home filled with sleeping kids is exactly why the City of Chicago should refuse to collaborate with ICE. ICE routinely violates the American people's constitutional rights. This guns blazing ICE raid deepens my resolve to organize my community so we can keep each other safe from the threat posed by ICE."
Related topics:
belmont craginchicagopolice involved shootingchicago shootingiceimmigration
Copyright © 2021 WLS-TV. All Rights Reserved.
More Videos
From CNN Newsource affiliates
TOP STORIES