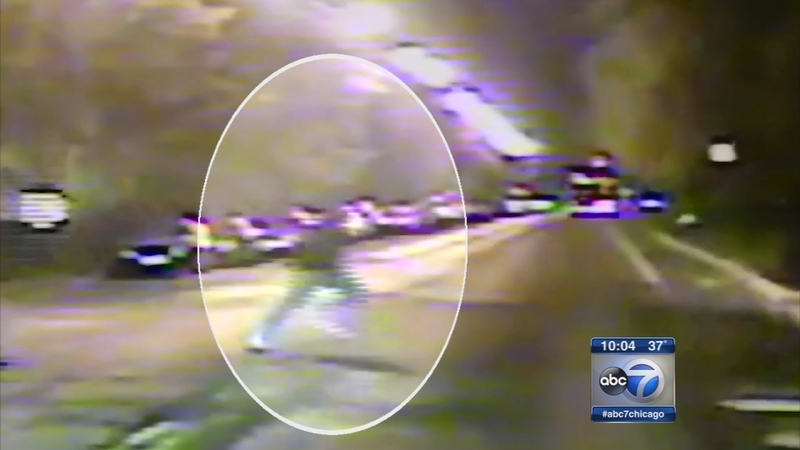 CHICAGO -- No charges will be filed in the Chicago police shooting of Ronald Johnson, 25, Cook County State's Attorney Anita Alvarez said Monday. She played the dash-cam video of the shooting after outlining the night Johnson was killed.

Johnson was shot to death by Officer George Hernandez in October 2014. Johnson's family argued Chicago police dash-cam video showed he was not armed, but experts determined otherwise, according to the Independent Police Review Authority investigation. Alvarez released that photo.

The blurry dash-cam video shows officers running after Johnson. As he runs off frame, Officer Hernandez raises his arms and flashes come from his gun. Johnson was hit twice from behind.

"The fact that the officer shot Ronald Johnson in the back is one of many factors that had to be carefully considered and evaluated. Even though Mr. Johnson was running away from Hernandez and other police officers, he was running towards a police vehicle containing two other responding officers and unknown numbers of the public inside that park," Alvarez said.
EMBED More News Videos

Alvarez also said the dash-cam video does not show a struggle between a Chicago police officer and Johnson before the shooting. In a detailed presentation including 911 calls and police squad locations, her office outlined Johnson's whereabouts on the night he was killed.

He and three others left a party around 12:30 a.m. on October 12, 2014, she said, and were shot at by an unknown gunman. That shooting caused damaged to the vehicle Johnson was in, but no one was injured.

At this point, Alvarez said Johnson was spotted twice by police officers near the scene.

"Those officers saw that Johnson was carrying a gun and ordered him to stop and drop the weapon," Alvarez said. Instead, he ran, she said.

A short time later, Johnson came across Officer Hernandez, who was told by other officers he had a gun. Hernandez shot Johnson near 53rd Street and King Drive in the city's Washington Park neighborhood.

The ABC7 I-Team obtained photos and documents from the police involved shooting, including the clothes Johnson wore the night he was killed. His jeans are soaked with blood and a bullet hole is seen behind the knee.

In the incident report, police said Officer Hernandez "feared for his life and lives of his fellow officers."

Johnson family attorney Michael Oppenheimer called Alvarez's presentation a "27-minute infomercial."
"The police and the state's attorney office have lied. They said he turned and pointed a weapon. And nobody can say he turned and did anything of the sort," Oppenheimer said. "There was no investigation in this case."

"IPRA says it's waiting on the state. The state says it's waiting for IPRA... That's a joke," Oppenheimer said. The head of IPRA stepped down over the weekend and Mayor Emanuel announced the new appointment Monday.

"This was a cover-up from the beginning," Oppenheimer said. "They showed you a blow-up and it's a shadow."

"For her to say my son has an object in his hand, I tell it to her face. It's a bald-faced lie. He had nothing in his hand. I hope one day she feel the pain I feel," Dorothy Holmes, Johnson's mother, said.

An IPRA spokesperson would not comment on an ongoing investigation.

The Johnson video was released on the day U.S. Attorney General Loretta Lynch announced a US Department of Justice investigation into the Chicago Police Department's use of force and police accountability.