Officer who dragged man off jet placed on leave
WLS
By Jason Knowles
CHICAGO (WLS) -- Video of police officers dragging a passenger from an overcrowded United Airlines flight sparked an uproar Monday on social media, and a spokesman for the airline insisted that employees had no choice but to contact authorities to remove the man.

As the flight waited to depart from Chicago's O'Hare International Airport, officers could be seen grabbing the screaming man from a window seat, pulling him across the armrest and dragging him down the aisle by his arms. The airline was trying to make room for four of its employees on the Sunday evening flight to Louisville, Ky.

"The incident on United flight 3411 was not in accordance with our standard operating procedure and the actions of the aviation security officer are obviously not condoned by the Department," a Chicago Dept. of Aviation statement Monday said. "That officer has been placed on leave effective today pending a thorough review of the situation."

The statement did not release the officer's name and it was not immediately clear which of the three men seen in the now-widely seen video taken by another passenger which one was placed on leave.

When airline employees named four customers who had to leave the plane, three of them did so. The fourth person refused to move, and police were called, United spokesman Charlie Hobart said.

The video of a united airlines passenger being dragged off a plane at O'Hare now has more than 100-million views. 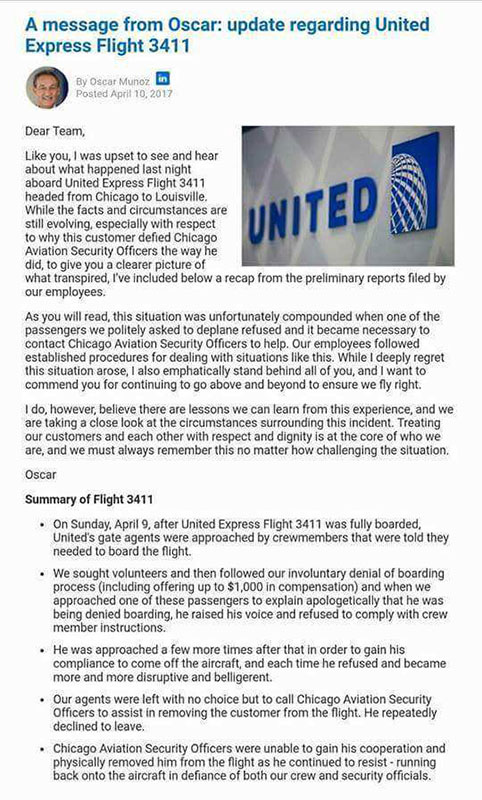 "We followed the right procedures," Hobart told the Associated Press in a phone interview. "That plane had to depart. We wanted to get our customers to their destinations."

United needed to get a four-person crew for Republic Airlines, which was operating the United Express flight, to Louisville Sunday. Otherwise, United would have had to cancel flights out of Louisville Monday.

"I think if United had to do this all over again, they might not have called the police," said Brian Sumers, airline expert and travel reporter. "They did have a situation where they thought that they had a passenger that wasn't following the rules. They couldn't get the passenger off the plane."

How do you avoid being bumped?

Airlines usually don't bump their best customers - elite-level frequent fliers and people who pay a lot of money for tickets.

"People do tend to get bumped if they pay very little for their ticket, if they checked in late and if they don't have a habit of flying United," Sumers said.

Experts say you should check in early and enroll in a frequent flier program to stay off the bump list.

"Customers now that are on social media saying this is a travesty, they'll be back to United when the fare is cheapest," Sumers said.

Oscar Munoz, CEO of United Airlines' parent company, described the event as "upsetting" and apologized for "having to re-accommodate these customers." He said the airline was conducting a review and reaching out to the passenger to "further address and resolve this situation."

The passenger told the manager that he was a doctor who needed to see patients in the morning, Bridges said.

"He was kind of saying that he was being singled out because he's a Chinese man" when speaking to the manager, who was African-American, Bridges said.

"You should know what this is like," the man said, according to Bridges.

The AP was unable to confirm the passenger's identity or ethnicity.

Two officers tried to reason with the man before a third came aboard and pointed at the man "basically saying, 'Sir, you have to get off the plane,'" Bridges said. That's when the altercation happened.

After the passenger was removed, the four United employees boarded the plane.

"People on the plane were letting them have it," Bridges said. "They were saying, 'You should be ashamed to work for this company.'"

A few minutes later, the man who was removed from the plane returned, looking dazed and saying he had to get home, Bridges said. Officers followed him to the back of the plane. Another man traveling with high school students stood up at that point and said they were getting off the plane, Bridges said.

About half of the passengers followed before United told everyone to get off, he said.

The man who was originally dragged down the aisle was removed from the plane again, and United employees made an announcement saying they had to "tidy up" the aircraft, Bridges said.

Bridges' wife told him she saw the man taken away on a stretcher, he said.

After a three-hour delay the flight took off without the man aboard, Bridges said. A United employee apologized to passengers, he said.

Airlines are allowed to sell more tickets than there are seats on the plane, and they routinely overbook flights because some people do not show up.

It's not unusual for airlines to offer travel vouchers to encourage people to give up their seats, and there are no rules for the process. When an airline demands that a passenger give up a seat, the airline is required to pay compensation of double the passenger's one-way fare, up to $675, if the passenger can be placed on another flight that arrives one to two hours later than the first flight, or four times the ticket price, up to $1,350, for longer delays.

The U.S. Department of Transportation released a statement saying:

"The Department of Transportation (USDOT) remains committed to protecting the rights of consumers and is reviewing the involuntary denied boarding of passenger(s) from United Express flight 3411 to determine whether the airline complied with the oversales rule. The Department is responsible for ensuring that airlines comply with the Department's consumer protection regulations including its oversales rule. While it is legal for airlines to involuntary bump passengers from an oversold flight when there are not enough volunteers, it is the airline's responsibility to determine its own fair boarding priorities."

When they bump passengers, airlines are required to give those passengers a written description of their compensation rights.

Hobart declined to say how the airline compensated the passengers who were forced to leave the plane, saying he did not have those details from employees on the scene.

Last year, United forced 3,765 people off oversold flights and another 62,895 United passengers volunteered to give up their seats, probably in exchange for travel vouchers.

That's out of more than 86 million people who boarded a United flight in 2016, according to government figures. United ranks in the middle of U.S. carriers when it comes to bumping passengers.

ExpressJet, which operates flights under the United Express, American Eagle and Delta Connection names, had the highest rate of bumping passengers last year. Among the largest carriers, Southwest Airlines had the highest rate, followed by JetBlue Airways.

Bridges said United should not have boarded the flight if it was overbooked.

"The man handled it wrong," he said. "The police were kind of put in a bad spot. There's a lot of ways United could have handled it, and that was not one of the good ways."

Editor's Note: United Airlines Flight 3411 was not overbooked. Our early reporting on the incident involving Dr. Dao makes reference to the flight being oversold because that was initially believed to be the cause for the removal of passengers. It has since been learned that passengers, including Dr. Dao, were removed to make room for four crew members.
Related topics:
kentuckyo'hareunited airlinescontroversial videou.s. & worldi teampassengerconsumer
Copyright © 2020 WLS-TV. All Rights Reserved.
More Videos
From CNN Newsource affiliates
TOP STORIES