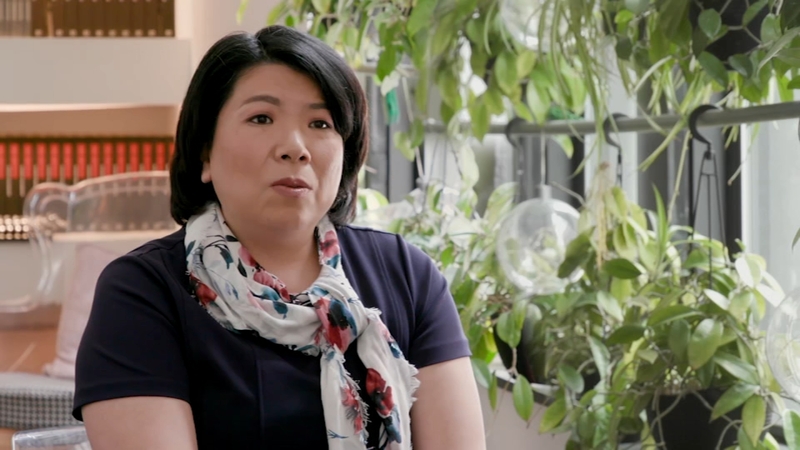 CHICAGO (WLS) -- Nicole Lee, who was just confirmed as the first Asian American woman to serve on Chicago's City Council, is representing the 11th Ward and making history in the same neighborhood she grew up in.

"It was a little of an out-of-the-body experience I think," Lee said, "being in the city council chambers having my hand on the bible like, for real."

Yes, for real - and it has been a whirlwind of a few weeks for Chicago's newest alderwoman, who put her very busy phone on silent as she sat down for a one-on-one interview at the Zhou B. Art Center, a studio space built by world renowned artist brothers after they immigrated from China to Bridgeport.

When asked about the significance of becoming the first Asian American woman to be an alderman in the city of Chicago, Lee said: "I don't know if your camera can see, I just got like goose pimples with you saying that... Yeah, it's very significant and I don't want to downplay that. I know how significant it is as someone who grew up in the community and couldn't have honestly imagined it."

Lee is the oldest of three siblings with deep roots in Chicago. Her father was a deputy chief of staff for Mayor Richard M. Daley.

"I grew up in Chinatown - basically the same building that I'm living in now," Lee said. "My mom was a business owner. She and my aunt Margaret ran a business, it was a beauty salon, flower shop and gift shop. I mean, we had all kinds of hustle going on back then."

She said that although she always felt a call to serve her community, politics wasn't her first career choice. After graduating from the University of Indiana, she worked with non-profits and the railroad industry, then most recently, as an executive with United Airlines.

"I got a phone call from a member a leader in the community saying, 'Oh, you know, I want to have this really important conversation with you,' and I was like, 'Okay, what's going on?'" Lee said.

Lee was used to getting called out of the blue, but this time, it wasn't an airline issue.

"I'm not a person that seeks out the limelight at all, but I'm not also uncomfortable in it," Lee said. "So when I got to know a couple of the other names, it's like, okay, at the end of the day, I felt like I think I would be a stronger voice in this."