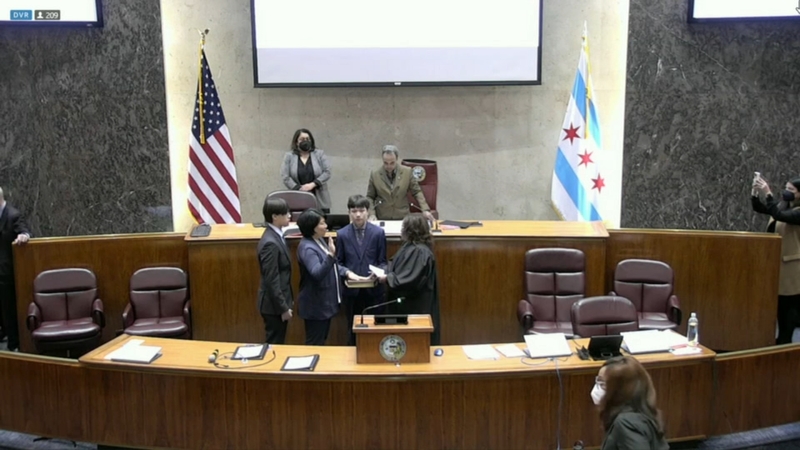 CHICAGO (WLS) -- History was made as the Chicago City Council approved Nicole Lee as alderwoman of the 11th Ward Monday, making her the first Asian American woman to serve on the city council.

Lee took the oath of office Monday afternoon before thanking her colleagues, who voted 45-0 to approve her nomination.

"To my esteemed colleagues, I'm so excited to say that for the first time today," Lee said. "Thank you for making that possible. Thank you, Mayor Lightfoot."

Lee was then escorted to her new desk, with her name plate already in place. She got hugs and handshakes from other council members who welcomed her and promised support. Lee told them she never aspired to public office, but since an early age has felt the call to serve.

"I know I'm the in exactly the right place at the right time. At this point in history, to be a part of this body to help led this great city as well as represent every single member of the 11th Ward, the storied 11th Ward of the city of Chicago," Lee said.

Earlier, Lee was at her new office, cleaning it up and getting it ready, saying there will need to be some redecorating. The name of her predecessor, Patrick Daley Thompson, has been scraped off the front window.

The mayor noted the historic nature of Lee becoming the first Asian American woman on the council, and the first Chinese American.

"I think what Nicole represents is the possible," Lightfoot said. "And that's important for our young people to see, to believe that they can reach higher heights."

"This is a new day," said John Daley, Cook County Commissioner, who shares the building with the 11th Ward. "I look forward to working with Nicole Lee... I think she's an outstanding choice."

Richard Considine, a lifelong Bridgeport resident, said he thinks Lee will win the acceptance of residents.

"I would just say be yourself and, and, you know, listen to people," he said.

"What I'm going to bring to the ward really is a kind ear, a listening an empathetic one to whatever struggles people are having right now," Lee said.

Lee said it will be her first priority to get to know the residents of her ward, followed closely by safety.