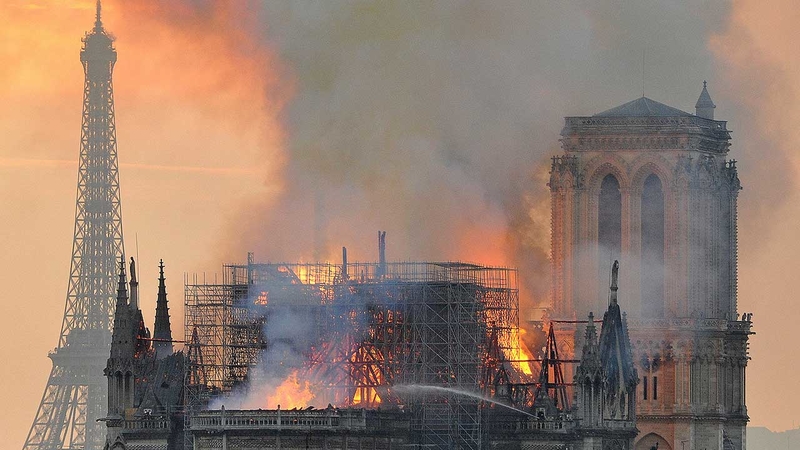 PHOTOS: A look inside and outside Notre Dame Cathedral during fire

PARIS -- As of Wednesday, at least $1 billion has already poured in from ordinary worshippers and high-powered magnates around the world to restore the fire-ravaged Notre Dame Cathedral in Paris, after the French president set a controversial five-year deadline to get the work done.

Construction teams brought in a huge crane and a delivery of planks of wood to the site Wednesday morning. Firefighters are still examining damage and shoring up the structure after Monday's fire collapsed the cathedral's spire and destroyed the roof.

Presidential cultural heritage envoy Stephane Bern told broadcaster France-Info on Wednesday that 880 million euros ($995 million) has been raised in just a day and a half since the fire. Contributions came from near and far, rich and poor - from Apple and magnates who own L'Oreal, Chanel and Dior, to Catholic parishioners and others from small towns and cities around France and the world.

.@notredameparis is a beacon of faith, hope & beauty, inspiring awe and reverence. The Walt Disney Company stands with our friends & neighbors in Paris, with heartfelt support and a $5 million donation for the restoration of this masterpiece.

A communique said that the Arnault family were "in solidarity with this national tragedy, and join in the reconstruction of this extraordinary cathedral, a symbol of France, of its heritage and togetherness."

PHOTOS: A look inside Notre Dame Cathedral during the fire

Oil and gas giant Total said it would contribute 100 million euros "to help the reconstruction of this architectural jewel."

Cosmetics maker L'Oreal promised the same amount to rebuild "a symbol of French heritage and of our common history."

Among other contributors, Bouygues construction group CEO Martin Bouygues said he and his brother Olivier would donate 10 million euros.

The French government is gathering donations and setting up a special office to deal with big-ticket offers.

Some criticism has already surfaced among those in France who say the money could be better spent elsewhere, on smaller struggling churches or workers.

A plan to safeguard the masterpieces and relics was quickly put into action after the fire broke out.

The Crown of Thorns, regarded as Notre Dame's most sacred relic, was among the treasures quickly transported after the fire broke out, authorities said. Brought to Paris by King Louis IX in the 13th century, it is purported to have been pressed onto Christ's head during the crucifixion.

The cathedral's famous 18th-century organ that boasts more than 8,000 pipes also survived. Some of the paintings and other art works are being dehumidified, protected and eventually restored at the Louvre.

The ABC Owned Televisions Stations contributed to this report.