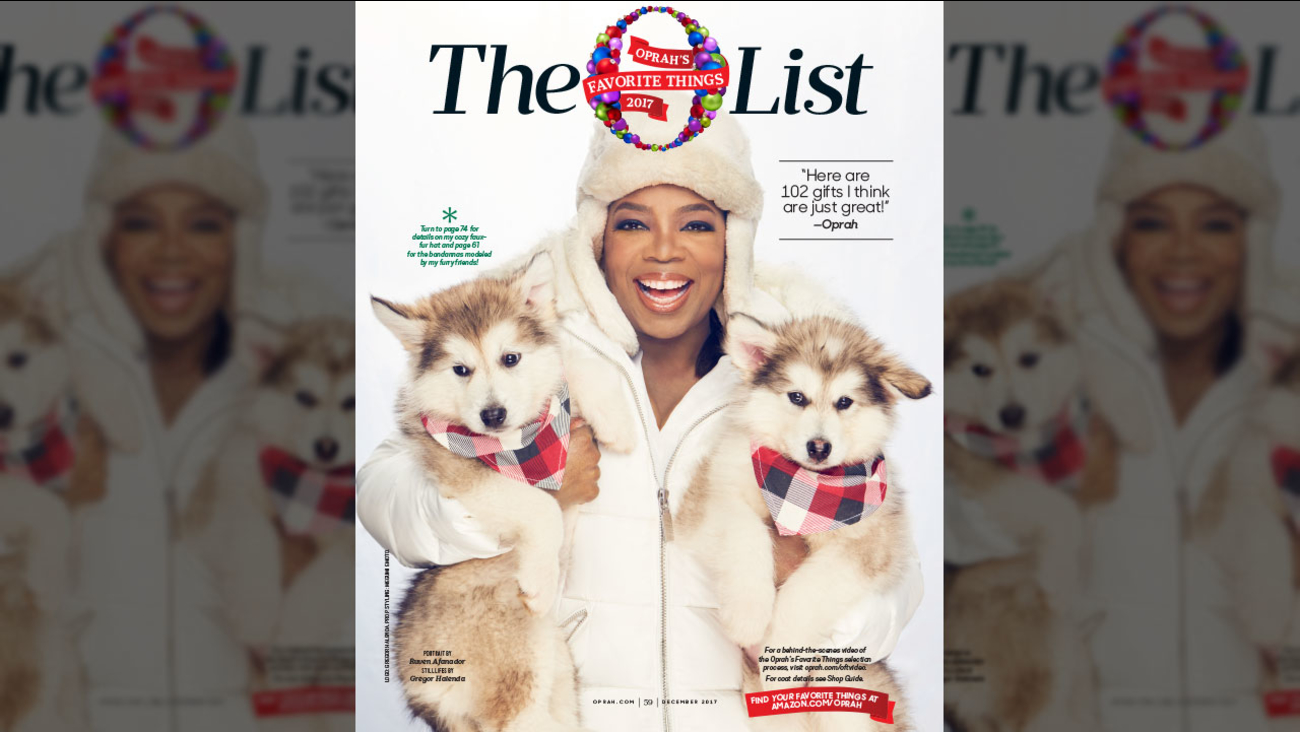 You may not think the holiday shopping season has arrived yet, but Oprah sure does. On Thursday morning her eponymous magazine released Oprah's Favorite Things, one of the most anticipated gift guides of the season.

My FAVORITE things! That time of year again. Something for everyone! I love sharing this gift guide with you all. 🎁 https://t.co/LjxkjLSjvS pic.twitter.com/IyLSvq5pF0

Each year the media icon curates a list of dozens of items that have earned her stamp of approval, whether they be cool gadgets, beauty products or kitchen accessories. In addition to catering to diverse interests, it includes a wide range of prices. The 102 items are featured in December's issue of O, The Oprah Magazine.

Here are highlights from the Associated Press:

GRATITUDE GLASS JAR: These handblown jars on a pedestal base have wooden lids and come with 365 bronze-foil adorned cards for families to log the things they truly appreciate. $45.

LOUVELLE SHOWER TURBAN: Made of quick-dry fabric with a waterproof lining, these turban-style shower caps come in fun patterns and colors to make that blowout last. Oh, and there's an adjustable knot for just the right fit. $40.

EMI JAY SMOOSH SHIRTS AND PANTS: If she could, Oprah would live in these ultra-soft but slightly structured sweat pants and shirts that come in light pink, gray and black, with an adjustable tie at the loose turtleneck. Shirts, $136. Pants, $132.

HONEY CAN DO HERB PRESERVER: Oprah grows a lot of her own herbs but often has the same problem as the rest of us: They quickly go yucky. Add a little water at the bottom of this glass jar, seal and keep herbs fresh for up to two weeks. $20.

SMART NORA SNORE SOLUTION: Give the gift of a snore solution that doesn't involve mouth guards, nose strips or straps. It DOES involve a little Bluetooth-enabled, egg-shaped device that sits on a nightstand and is triggered by the snore. It then gently and slowly pumps up an inflatable pillow insert tucked into a pillowcase to shift the culprit's sleeping position and lessen the noise. $299.

EMU AUSTRALIA MAYBERRY SHEEPSKIN SLIPPERS: With a sturdy lug sole, these fuzzy slides come in bright pink, blue and orange. Oprah was a bit skeptical at first, Glassman said. "She said, really? I think my, like, Aunt Estelle used to wear those." They're not unlike furry footwear found on runways and in the streets of New York and Paris, he noted. $60.

FIVE POUNDS OF FRESH BLUEBERRIES: Wild blueberries frozen and shipped in a cardboard box within 24 hours of harvest from Josh Pond Farm in Whiting, Maine, near the northeast coast. Little secret: The farm is owned by TV exec Lorne Michaels, Glassman said. $50.

MODEL BAKERY ENGLISH MUFFINS: Due to Oprah's obsession with these muffins, they're back for a second year, Glassman said. She even travels with them and brought a batch to the set of "A Wrinkle in Time" in New Zealand for cast and crew to enjoy. The artisanal darlings from this small Napa bakery come in a set with six original and six spelt. $35.

CASA DRAGONES JOVEN SIPPING TEQUILA: Oprah likes her tequila. This bottle for sipping is made by a woman-owned, small-batch distillery in Mexico and is her go-to. It's a blend of silver and extra-aged tequila. The sipping bottle is pricy at $285. Oprah's also offering a tequila blanco at $75 for mixing into cocktails.

YELLOW LEAF HAMMOCKS: Oprah once bought a house because it had a hammock hanging in the yard, Glassman said. These classic doubles are made in Thailand by artisan weavers. "When she stopped doing the daily talk show everyone was like, what are you gonna do and she goes I'm just gonna be laying in my hammock reading a book," Glassman said. "That lasted about two days." $199.

THE ECHO SHOW: Alexa has gone video. There's a built-in screen to show content of all kinds, from Amazon, YouTube, even your own security cameras. Ask her to pull up photos and shopping lists. $230.