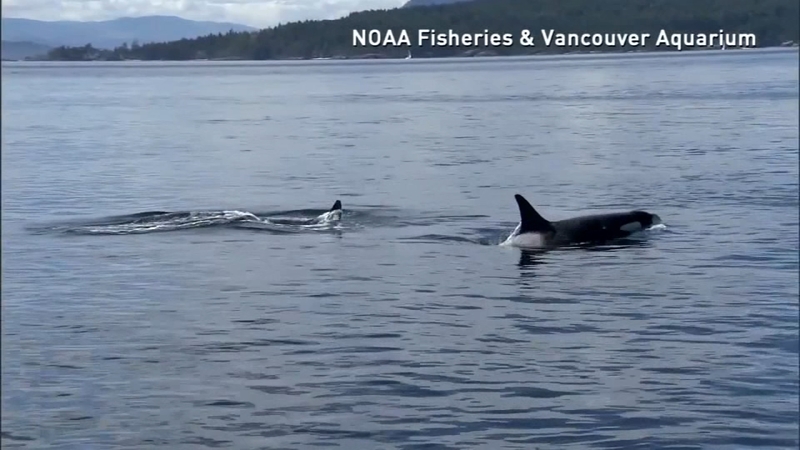 Save the Orcas: WA students, activists file petition with Congress

SEATTLE (WLS) -- A group of students and local environmental activists in Washington have filed a petition Wednesday with the U.S. government to take down dams along a local river to save orcas.

Experts like Robb Krehbiel with Defenders of Wildlife say taking down these huge dams would restore over a million adult Chinook salmon every year for orcas.

"We can't wait! This population has been declining steadily for decades," said Krehbiel. "If we don't investing in real solutions, then we may lose these orcas in our lifetime."

Students from across the state partnered with Environment Washington, a citizen-based local environmental advocacy group, to gather 17, 000 signatures for a petition to Congress.

"It's going to affect the entire ecosystem and the Puget Sound," said Krehbiel.

The petition asks the government to take down four dams along the Lower Snake River in south eastern Washington.

The study says that the ecological and economic benefits of removing the four dams will outweigh any losses to agricultural and commercial industries.

The Army Corp of Engineers along with the Bonoville Power Administration owns the dams.

The Army Corp released a statement to KOMO and says in part:
"Dam breaching is not a silver bullet nor does the Corps have the authority from Congress to implement an action such as dam breaching. Until such a time, the Corps must continue to operate and maintain these dams for their authorized purposes."
Report a correction or typo
Related topics:
pets & animalswashingtonenvironmentwhalewater conservationu.s. & worldconservationcongresssciencestudents
Copyright © 2021 WLS-TV. All Rights Reserved.
TOP STORIES
Video shows Gabby Petito's police encounter before disappearance
Steve 'Mongo' McMichael shares glimpse inside brave battle with ALS
CPD officer struck while directing traffic in Loop
Springfield grandmother's obituary takes aim at unvaccinated
Woman shot on I-57 in Markham
Crews break ground on Casa Durango affordable housing in Pilsen
Bialik, Jennings to guest-host 'Jeopardy!' for rest of year
Show More
TIMELINE: What happened to Gabby Petito?
Zebras on the loose in WI prompt hilarious reaction
Kane County man found justified in shooting of neighbor's dog
Glen Ellyn parents ask to keep anti-mask protests away from school
Timeline of Murdaugh family investigations
More TOP STORIES News