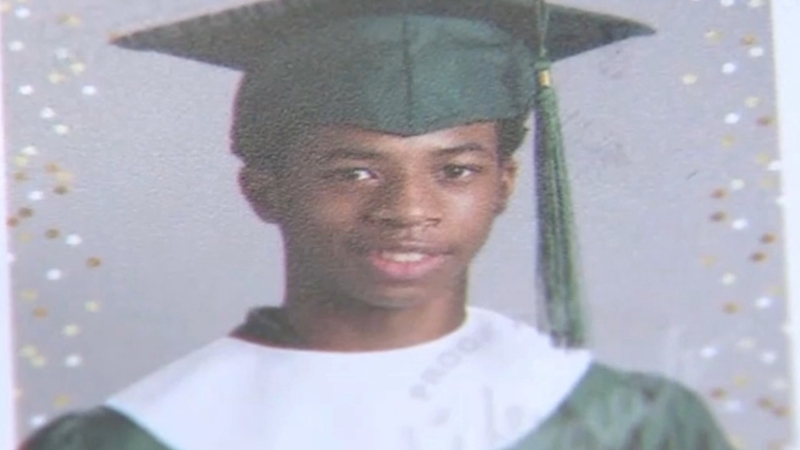 PHILADELPHIA -- A Philadelphia mother fearing for her family's safety spoke out after her son was shot more than a dozen times Monday night.

"I was in disbelief. Everything from the waist down was covered in blood," said the mother after a gunman opened fire on her 15-year-old son, Rahim, and another teen around 8:45 p.m.

Rahim had apparently played basketball with friends before stopping to grab a bite nearby.

"As they exited the store, I guess the guy came from around the corner and started shooting," she said. "My son said all he remembered was falling and not being able to get up."

Family of one of the 15 year olds from Monday night’s shooting tells @6abc their son had just finished playing basketball before he grabbed a bite to eat. When he and his friend left the store that’s when a the pair were gunned down at 11th and Harper @6abc pic.twitter.com/2Za7jLBJeV

Detectives say the victims don't have a criminal history and aren't from the neighborhood. They are still trying to figure out why a gunman would unleash that kind of firepower on two teens.

Eleven people were killed, including four children, and more than 60 others wounded in shootings across Chicago over the weekend, police said.

"He's not inclined to the streets, nor hanging with people in the streets. That's what made it so shocking," said Warren Upchurch, director of New Options More Opportunities.

Upchurch says this week, Rahim was supposed to take part in a career development program with nonprofit New Options More opportunities -- a stop the violence initiative he's been a part of for two years.

15 year old shot multiple times is stable. Family identified him as Rahim; says he was playing basketball w/ friends, grabbed a bite afterwards, when he was gunned down. @PhillyPolice say the victim has no criminal past, searching for motive and gunman. @6abc pic.twitter.com/HudPBDwTPa

In fact, this is the program's second child to fall victim to gun violence. Last September, another student was injured after a gunman opened fire at a Gratz Imhotep football game.

"We're an early initiative intervention prevention program that's designed to stop stuff like this from happening. And with everything we're striving to do, every time we take these types of hits, it hurts!" said Rickey Duncan with New Options More Opportunities.

Data show shootings are up 24% since the start of the year.

Rahim is now part of a growing statistic.

"What do you have to say to the shooter?" asked reporter Christie Ileto.