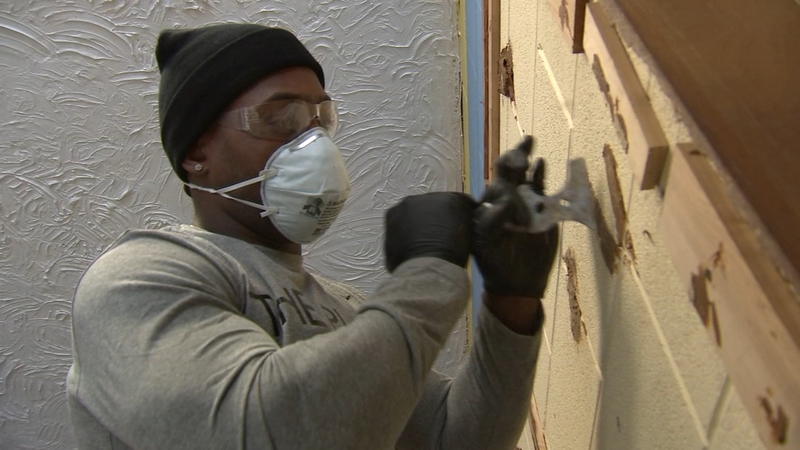 Plan B Foundation hires ex-convicts and trains them to become construction workers, so that they may become a self-sufficient part of the local workforce.

"I didn't know where to start when I got out of jail. I just didn't know anything, how to get a job, how to find a job," said Johnathan Smith, who's now a team leader at Plan B Foundation.

Smith spent nearly six years of his life behind bars.

"I caught my first adult case when I was 14 for selling drugs. Selling within a thousand feet of a school. And now it's crazy. Now I'm trying to help remake a school," Smith said.

Smith is among many working with Plan B to help restore Christ Lutheran School on Chicago's West Side, said Carrie Brockie, the nonprofit's founder.

"We came down here, saw what they were going through. The condition of the school, it just made you want to help," said Brockie said.

Smith said he didn't know anything about tools when he first became part of program, but now he's trying to become a foreman.

"I stayed on him because I really liked Johnathan," Brockie said. "The most challenging was probably communication. There were a lot of times where Johnathan, he'd disappear. I would always track him down. Tell me, what's going on, and he'd tell me what's going on."

Smith said, "It's hard coming from neighborhoods where we come from because that's what we do to survive. But it's all a facade. There is always a plan B. You can always do something else."

George Collins, who works as a mentor for the nonprofit, was released from prison in 2014 after serving over 20 years.

"The world is like really different. They really kicked me out with just a goodbye. Here's your money from when you're in lockup. We'll see you later. Gave me a bus ticket. Left me off. I'm like, what do I do? Go for a job? OK, I've got a felony record. Nobody is going to hire me," Collins said.

Collins said questions on job applications about prior convictions prevent many from finding jobs.

"We take out the one thing that might stop me from getting a job. I might be qualified. I can have all that, but if I fill out a resume or an application for these guys, they scroll all the way down and see that box," Collins said. "If I take that that box out and you get me to come in and build you a wall and you're amazed, now you see."
Report a correction or typo
Related topics:
societychicagoemploymentschoolconstructiontraining tipsnonprofitprison
Copyright © 2021 WLS-TV. All Rights Reserved.
TOP STORIES
New omicron variant stokes world fears, triggers travel bans
Entrances to Aurora outlet mall temporarily closed due to crowds
Machete attacks reported on Chicago's NW Side: 'The cut was very deep'
Foot Locker among 3 stores burglarized within an hour on NW Side: CPD
CTA bus driver stabbed while confronting man who stole from woman
Police close westbound I-88 in Aurora due to 'serious injury' crash
Watch: Thieves burglarize Pilsen restaurants overnight
Show More
Musical theater master Stephen Sondheim dies at 91
Missing gun belonging to Laundrie's parents wasn't made public
Stores kick off Black Friday but pandemic woes linger
'The Hot Zone: Anthrax' revisits troubled days after 9/11
Stocks fall sharply on new COVID variant; Dow has worst day of year
More TOP STORIES News