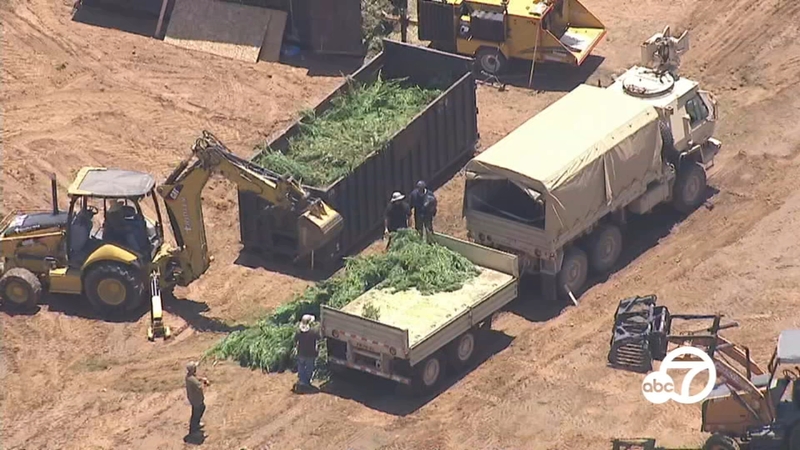 PERRIS, Calif. -- About 14.9 tons of marijuana were discovered along with weapons and a honey oil lab in a series of pot busts in Perris on Thursday, authorities said.

The Riverside County Sheriff's Department said 48 search warrants were served at illegal grow operations, which led to the discovery of the lab, 37 guns and thousands of pounds of marijuana.

Twenty-seven arrests were made in the pot busts. The suspects in custody were not immediately identified.

"So what did we find at these illegal marijuana grows? - Dogs and guns. The dogs are ok," the Sheriff's Department said in a tweet, which included photos of deputies petting one of the animals.

So what did we find at these illegal marijuana grows? - Dogs and guns. The dogs are ok #RCDAS and the guns were taken as evidence. currents stats: 48 search warrants, 27 arrest, 37 guns, and 14.9 tons of illegal marijuana. #riversidecounty #sheriff #perrisarea #illegalgrows pic.twitter.com/XaHj3qryF7

Other images showed some of the seized firearms, including high-powered rifles, handguns and a shotgun.