WLS
By Jessica D'Onofrio, Chuck Goudie, Evelyn Holmes and Barb Markoff
CHICAGO (WLS) -- Illinois and Indiana residents went to the polls Tuesday for the midterm elections, even as thousands of people already cast their ballot during early voting.

In Illinois, polls opened at 6 a.m. and were open until 7 p.m. Anyone in line when polls closed was still able to cast a vote.

The Chicago Board of Elections said the unofficial turnout in Chicago was 55.6 percent, not including the mail-in votes that are still arriving. It is on pace to be the highest midterm turnout since 1986 when turnout was 58 percent. Four years ago, turnout was 48 percent.

Including Early Voting, mail-in ballots that already arrived and Election Day, there were over 162,000 voters between 25 and 34 years old as of 7 p.m. It was the largest turnout of any age group.

Some Chicago precincts will extend their hours due to various reasons including judges not showing up, equipment sent to wrong location and wrong ballots.

The following precincts will be open until 8 p.m.:

In DuPage County, polling locations will be open until 7:30 p.m.

In Indiana, all locations in Monroe County will be open an extra hour after there were not enough ballots at some polling places.

Per judge order, Porter County will keep polls open up to 2.5 hours in 12 townships. An inspector did not show up on time, according to the lawyer who filed the motion to extend the hours.

Election officials reported that voter turnout was very high in Chicago and across the state.

Energized voters took to the polls early Tuesday, showing up in force at many locations, including the precinct at 400 E. Randolph St.

"I just don't like the direction the country is going, so I want my vote heard," voter Nate Codina said.

"I am so excited. I am so hopeful that it will be - it will break records for a midterm election. You know, in 2014, we only had a 50 percent turnout. So I am very, very hopeful," said Marisel Hernandez, chairwoman of the Chicago Board of Elections.
WATCH: Celebrating voter pride
EMBED More News Videos

Data shows Chicago had a 96 percent increase in early voter turnout compared to the 2014 midterm, a strong sign of the enthusiasm we could see Tuesday. This time around in Chicago, a surge of millennials are participating.

"I think that a lot of millennials, they don't want to get involved. So I think the biggest thing this year is encouraging them to get involved," voter Kyle Gazzolo said. "A lot of the times, they just make up excuses. I wanted to make sure my voice was heard as a millennial today."

Waiting in a long line to vote? This nonprofit will send you free pizza
EMBED More News Videos

If you find yourself waiting in a long line to vote, reach out to Pizza to the Polls. The nonprofit is just one of the groups and individuals ''Good Morning America'' found helping getting out the vote on Tuesday.

Meanwhile women have already been a tremendous force. In Chicago, 54 percent of the early were female, along with 59 percent of the vote by mail applications.

"I feel that it's important that women have a voice and that they're heard," voter Charmaine Foreman said. "I think it's long past due that women can step out and not stand in the shadows and people recognize that we do have power, that we do have strength."

Scott Phillips brought his daughters to the polls Tuesday morning to teach them the importance of exercising your right to vote.

"If they don't show up like we did today, then what we want might not never happen," Phillips said.

Elections officials said Chicago are still waiting for 40,000 vote by mail ballots to be returned and they are telling people they must have them postmarked by Tuesday. If you can't, the option would be to vote at your precinct in person.
ABC7's special election night coverage continues Tuesday night at 7 p.m. ABC News is tracking the big national races and we'll have live, local results from the campaigns throughout the evening as well as extensive coverage on ABC7Chicago.com.
Then stay tuned for Eyewitness News at 10 p.m., for live coverage from the campaigns, along with the latest local election results and expert analysis.

How to watch midterm election coverage from ABC News
Midterm election races to keep an eye on
These candidates could make history on Tuesday
Why do we have midterm elections?
What is a blue wave?
Who should recount elections: People ... or machines?
Report a correction or typo
Related topics:
politicschicagoloophighland parkgold coastrepublicansvotingelection 2018vote 2018democrats
Copyright © 2021 WLS-TV. All Rights Reserved.
RELATED 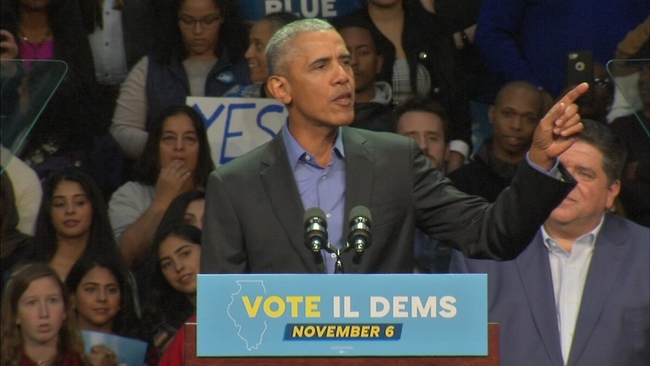