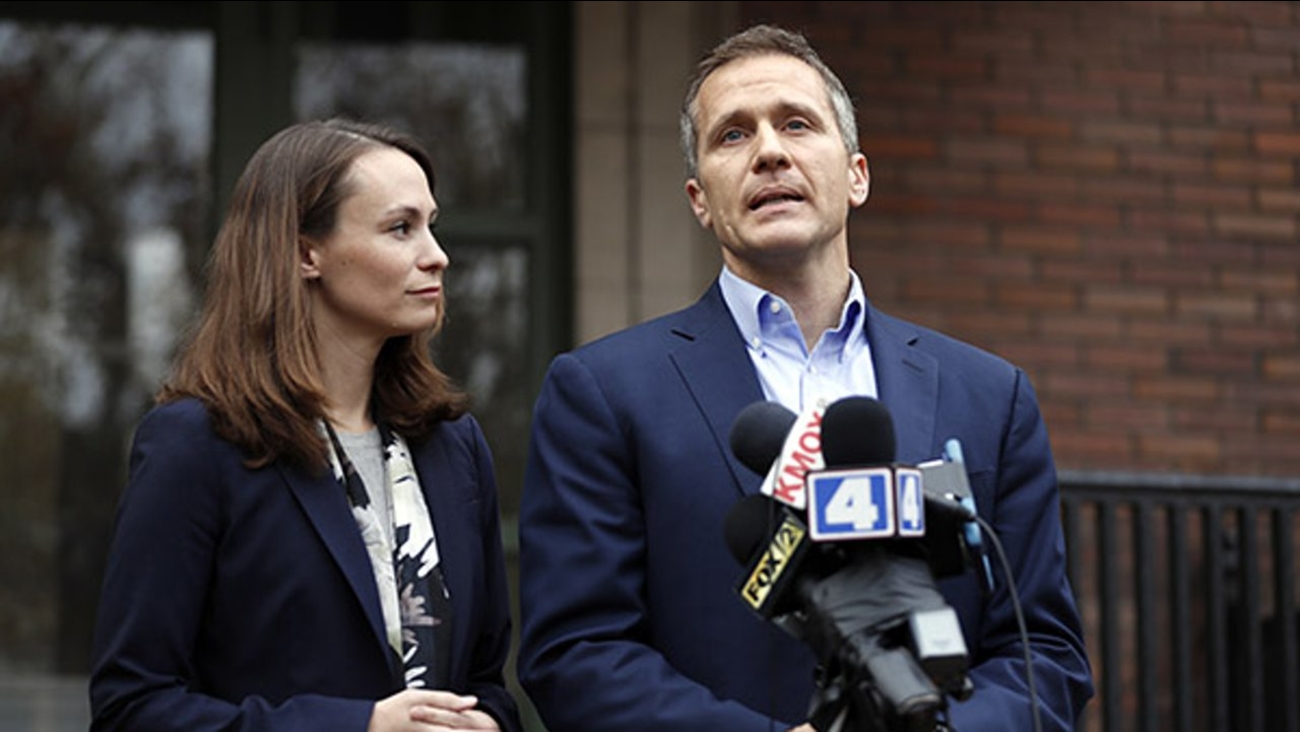 JEFFERSON CITY, Mo. -- Missouri Gov. Eric Greitens has acknowledged being "unfaithful" in his marriage but denies allegations that he blackmailed a woman to stay quiet, following a bombshell news report that overshadowed his annual address to the Legislature.

The Republican governor and his wife released a statement late Wednesday after St. Louis television station KMOV reported that he had a sexual relationship with his former hairdresser in 2015. The station reported that the woman's ex-husband alleged Greitens photographed her nude and threatened to publicize the images if she spoke about the affair.

"A few years ago, before Eric was elected governor, there was a time when he was unfaithful in our marriage," the statement from Greitens and his wife, Sheena , said. "This was a deeply personal mistake. Eric took responsibility, and we dealt with this together honestly and privately."

A first-time candidate, Greitens rose to office in the same November 2016 election that brought President Donald Trump to power. The former Rhodes scholar capitalized on his military service as a Navy SEAL, his work as founder of a veterans' charity and "most importantly" his role as "a proud husband and father." The Greitens married in 2011 and have two young sons.

During the campaign, Greitens cast himself as an outsider going up against a career politician, the state's Democratic attorney general. He's not up for re-election until 2020. He has barely hidden his higher political ambitions and reserved the web address ericgreitensforpresident.com years ago.

The television report aired after Greitens gave his State of the State address.

The woman involved did not comment on the record to the TV station, which did not name her. But her ex-husband, who also was not named, provided an audio recording he made to KMOV in which the woman gives details about a sexual encounter she says she had with Greitens in March 2015 at his St. Louis home. The woman did not know her then-husband was recording their conversation.

The alleged March 2015 encounter came after Greitens opened a committee to explore a bid for Missouri governor but before he officially announced his candidacy. She said on the tape that he invited her downstairs at his home because he wanted to show her "how to do a proper pull-up."

She said: "I knew he was being sexual, and I still let him. And he used some sort of tape, I don't know what it was, and taped my hands to these rings and then put a blindfold on me."

She says she later realized he took a photo of her.

"I saw a flash through the blindfold and he said, 'You're never going to mention my name.'"

A bipartisan group of state senators signed a letter asking the state attorney general to investigate the blackmail allegations. Attorney General Josh Hawley's office did not have an immediate response.

GOP leaders in the Missouri Senate described the allegations against Greitens as "shocking and concerning."

Senate Democratic leaders Gina Walsh and Kiki Curls said "violence and threats against women are never acceptable" and that the allegations must be investigated. One Democratic state senator, Jamilah Nasheed, called on the governor to resign in a series of tweets.

The Legislature adjourned by midday Thursday for the long Martin Luther King Jr. holiday weekend. Lawmakers were not scheduled to return until Tuesday.

The statement from Greitens and his wife did not address the affair specifically or the allegations, but in a separate statement late Wednesday Greitens' attorney, Jim Bennett, said, "There was no blackmail and that claim is false."

The hairdresser eventually sent Greitens an email asking him to stop booking appointments at the salon where she worked.

The St. Louis Post-Dispatch reports that the email was sent Oct. 20, 2015, three weeks after Greitens filed papers formally starting his 2016 gubernatorial campaign. It was sent to the same account that Greitens listed on a website he used in the campaign.

The newspaper did not say how it obtained the email.

She asked Greitens, whom she called by his first name, to "please consider all who are involved and the circumstances around us." She said returning to the salon "isn't fair to me, nor anyone close to us" and that she needed to "move forward."

The lawyer for the ex-husband said the FBI has contacted him several times since October 2016 about the affair.

Attorney Al Watkins said Thursday that he does not know if the FBI is conducting a criminal investigation. But Watkins said the agency has spoken to him about the affair as well as allegations that Greitens threatened to blackmail his client's ex-wife using compromising photos if she spoke about their liaisons.

He did not say if the ex-husband has also heard from the FBI.

A spokeswoman for the FBI's St. Louis office said the agency could not confirm or deny that it was investigating.

Bennett denied that authorities are involved.

"The claim that this nearly three-year-old story has generated or should generate law enforcement interest is completely false," he said.

Sheena Greitens is an assistant professor in the political science department at the University of Missouri and co-director of the university's Institute for Korean Studies. Much of her research focuses on China and North Korea.

She said in a statement that the couple has "a loving marriage and an awesome family" and urged "the media and those who wish to peddle gossip to stay away from me and my children."

The governor was married once before and divorced in 2003.

Watkins said his client and the woman who allegedly had an affair with Greitens said the couple tried to reconcile after the March 2015 incident but that the relationship with Greitens continued for several months and caused their breakup.

The ex-husband told KMOV that he believed the story would eventually be made public and he wanted to protect his family.
Report a correction or typo
Related topics:
politicsmissourimarriagegovernoru.s. & worldblackmail
Copyright © 2021 by The Associated Press. All Rights Reserved.
More Videos
From CNN Newsource affiliates
TOP STORIES