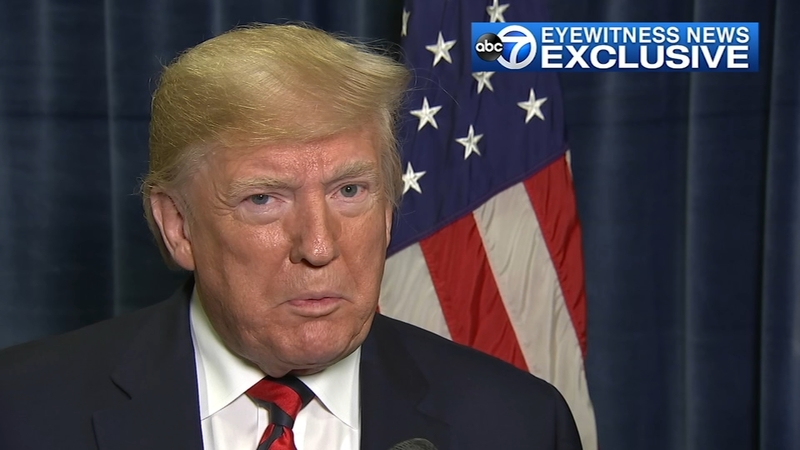 Trump spoke at the International Association of Chiefs of Police Conference at McCormick Place, addressing a wide range of topics, including efforts to reduce crime and paying respect to Chicago police officers wounded in the line of duty.

President Donald Trump visited Chicago on Monday to speak to the International Association of Police Chiefs at McCormick Place.

ABC7 Political Reporter Craig Wall spoke exclusively with the president, and asked him why Chicago had been such a frequent target.

"Well, all you have to do is take a look at your numbers, where you have 500 and 600 murders over the year," Trump said. "You have all the problems that you've had. It can be straightened out with proper management."

The president blamed the murders and shootings on Chicago Police Superintendent Eddie Johnson, Mayor Lori Lightfoot, and Chicago's status as a sanctuary city.

"You need leadership at the mayor's level and you need a police commission or a police superintendent who can do the job, and obviously that's not what you have," he said.

President Donald Trump visited Chicago on Monday to speak to the International Association of Police Chiefs at McCormick Place. Before President Trump took the stage, he spoke exclusively with ABC 7 Political Reporter Craig Wall. Wall asked the President about topics including violence, Chicago's status as a sanctuary city and the future of imprisoned former Illinois Governor, Rod Blagojevich. Watch the full interview here

"You've had many instances of horrible crime that wouldn't have taken place except for the fact that this is a big fat sanctuary city," Trump added.

Once again, Trump dangled the possibility of a pardon for imprisoned and disgraced former governor Rod Blagojevich.

"No, he should not at all give up hope, at all. We are looking at it," said Trump.

Wall asked the president if he had anything good to say about Chicago. He said it has potential, but once more threatened to bring in federal agencies if crime is not brought under control.

Trump also tore into Johnson and the city during his speech.

"There is one person who is not here today," Trump said to a friendly crowd. "Where is he? I want to talk to him. In fact, more than anyone else, this person should be here because maybe he could learn something, and that's the superintendent of the Chicago Police, Eddie Johnson."

Johnson, who is hosting the conference, said he was boycotting Trump's speech because "it just doesn't line up with our city's core values along with my personal values."

Trump has often referred to high crime rates in Chicago. He also made remarks about the city's violence during last year's IACP conference, which was held in Orlando, Florida.

"I have directed the attorney general's office to immediately go to the great city of Chicago to help straighten out the terrible shooting wave," Trump said at the time.

Trump then turned his attention to actor Jussie Smollett, who was accused of staging a racist homophobic attack on himself in Chicago's Streeterville neighborhood in January. Smollett was indicted on multiple charges of disorderly conduct in the incident, which were all dropped earlier this year.

"Then you have the case of this wise guy Jussie Smollett, who beat up himself. And he said MAGA country did it," Trump said. He called the incident a "scam" and a "hate crime," and compared it to the ongoing impeachment inquiry in the U.S. House of Representatives.

President Trump offered praise for the CPD officer shot by the Fulton Market shooting suspect, then slammed Chicago's status as a sanctuary city in his speech Monday.

Despite the president's issues with Supt. Johnson, he did pay special tribute to the Chicago police officer who was shot and critically injured while apprehending a suspected wanted for shooting a woman in the city's Fulton River District last month.

"After a month in the hospital and multiple surgeries after that, Adam recently came home to his wife Annie and to his two young children," Trump said. "So badly hurt, too. We are profoundly grateful that Adam Wazny is with us today. Officer Wazny, we commend your tremendous bravery. Thank you."

The 16-year veteran of Chicago's police force was released from the hospital just weeks ago after spending a month undergoing multiple surgeries and recovering.

"Thank you, Adam. You look good to me. Very handsome. If I had a face like that, I would have been president ten years earlier. You are looking good, Adam," Trump added.

Wazny said the moment was surreal.

"It's hard to describe your feelings. Obviously I'm completely grateful for everything, for all this support," he said. "To be even mentioned by the president, it's such an honor."

The president sang the praises of law enforcement in the crowd, but not the host city of the conference.

"Chicago is unfortunately the worst sanctuary city in America. Chicago protects criminals at a level few could even imagine," he said.

Trump did not mince words about crime in the city.

"All over the world they're talking about Chicago. Afghanistan is a safe place by comparison. It's true," he said.

"Recently they had 78 shootings over a weekend spree and three people killed," Trump claimed. "And Chicago has the toughest gun laws in the United States. That doesn't seem to be working too well, does it? A lot of you people know."

The ABC7 I-Team looked into those claims about Chicago violence, and found CPD data does not match the president's claims.

On the other hand, Trump also claimed that 13,067 people had been shot under Johnson's command. Since April 2016, only 11,967 have been shot, according to the Chicago Police Department.

After his speech, Trump signed an executive order at the conference creating a presidential commission on law enforcement to study issues like substance abuse, homelessness and mental illness, the White House said.

Thousands of protesters rallied in downtown Chicago amid President Trump's first visit to the city since his inauguration.

Trump's trip on Monday was a stark contrast to his last scheduled visit to Chicago. Back in 2016, he never made it to the stage for a campaign rally at the University of Illinois Pavilion after clashes between supporters and demonstrators.

Once again, thousands of protesters took to the streets to decry the president's visit. Outside Trump International Hotel & Tower Chicago, where the president held a political fundraiser, roughly 6,000 people filled the streets with chants, whistles and drums.

They criticized his policies on everything from the environment, gun violence, immigration and education.

"The things that are proven to help children and families thrive he's cut right and left out of the budget because he doesn't want to support cities," said Marj Halpernin with Indivisible Chicago. "Well this city doesn't support him."

Some protesters called for Trump's impeachment, others registered people to vote, calling for change to be made at the ballot box.

"He has no right to be president, he has no right," said Anita, a protester. "He's an anarchist and he's is destroying our country from within."

"I register people to vote every single day, I go door-to-door, we go to events." said Maggie O'Keefe, who registered people to vote during the rally. "It's vital and important to have young people come out to vote but also re-registering people."

An estimated 6,000 protesters marched through downtown Chicago as President Trump delivered a speech at the International Association of Chiefs of Police conference.

Chicago Public Schools Teachers, who were released from the picket lines of their teacher's protest early, were also amongst protesters.

"From a teacher's standpoint, the language that Mr. Trump uses is very hurtful and very critical," said Tim Tuten, a CPS teacher. "We spend every day with our students telling them be supportive of one another, say positive things of one another, don't swear, don't be dismissive."

A couple dozen counter-protesters also showed up, supporting the president from behind a police divider.

"He is direct, straight-forward and to the point. He doesn't sugar coat anything. He says it like it is." said Diana Caban, a Trump supporter. "He's putting this country first which is amazing, and I hope in 2020 it only gets better."

"I think he gets a raw deal a lot of times, he doesn't always say the right stuff," said Joe Loris, a Trump supporter. "If he just kept his mouth shut a little bit, he'd be doing a lot better."

A small group also gathered outside of Trump Tower on Sunday night to protest the president's visit.

During the political fundraiser, least 250 people gathered to raise upwards $4 million for the president's re-election bid.