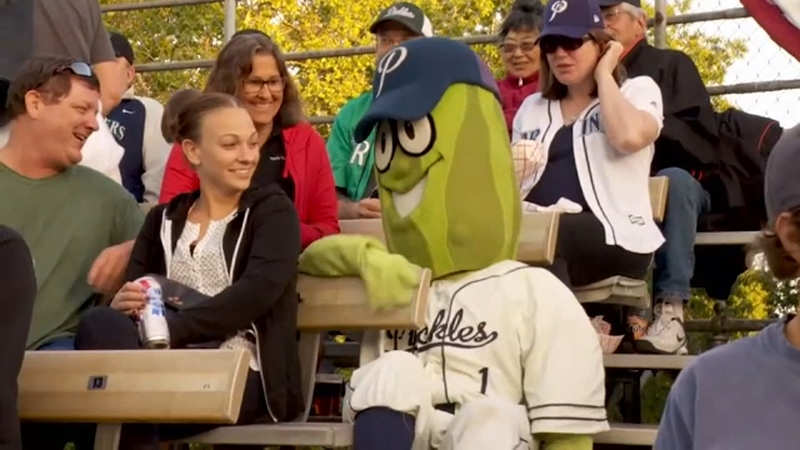 Mascots across US help search for missing Portland Pickles costume

PORTLAND, Ore. -- The reward is growing for the return of Dillion T. Pickle, the mascot of the Portland Pickles baseball team.

He hasn't been seen since a porch pirate stole the mascot costume earlier this week, KATU reported.

Now, fans are ponying up various items for his safe return, from concert tickets to a thousand dollars worth of pickles.

BREAKING: The official Pickle of the Portland Pickles @WicklesPickles is offering $1000 worth of Wickles Pickles products and merchandise for any info leading to the safe return of Dillon T. Pickle! #FindDillon pic.twitter.com/Vy5uVoPze3

About five years ago, a thief broke into Timber Joey's car, the mascot of the Portland Timbers, and stole his gear.

A sharp-eyed news crew spotted somebody on the street wearing it and helped Timber Joey get it back.

Pickles fans hope the same thing happens this time around.

On the off chance that somebody puts that costume on and walks down the street, Kristin Soloman said, "Oh my gosh, I think that we'd all have to be like citizen's arrest, right? Like what are you doing bro? You have to return this, you're not the real Dillon. You're an impostor."

Mascots from New Hampshire to Texas to California, and even Canada, are getting the word out about Dillon on Twitter.

Solomon came in to the team store to buy a Bobblehead for her friend who just had a son named Dillon, and this whole story is turning her into a Pickles fan.

"Making me get excited about supporting the team and getting out there and see a game," she said.

Could it be that's what the team ultimately has in mind?

Some of the conspiracy theorists say maybe this is just a big P.R. stunt.

"It could be," Solomon admitted. "We don't really know, right? I mean, it would be a brilliant one."