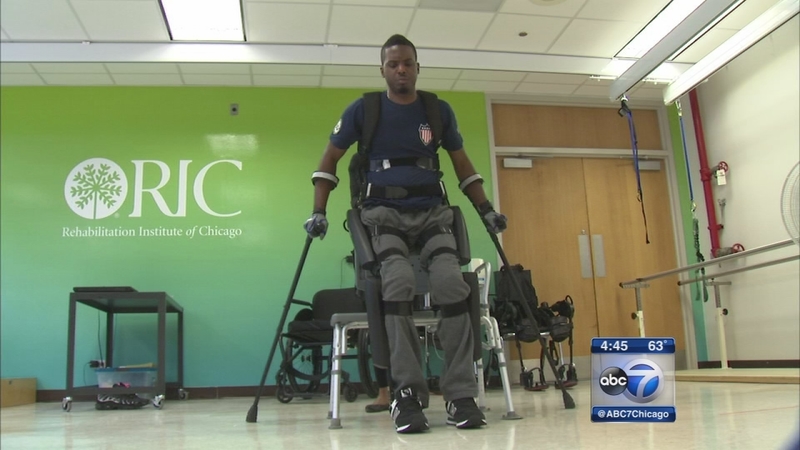 CHICAGO (WLS) -- When his career as a military aviator was cut short by a motorcycle accident, Roosevelt "R.J." Anderson, Jr. just set his sights on a new goal. Now, an amazing piece of technology is helping him with his new plan to walk again.

Anderson had just been accepted into an elite aviation unit in the U.S. Army, and it looked like the sky was the limit for his military career.

"Being a soldier, it was the best job ever," Anderson said.

But his job ended in November 2012 after a motorcycle crash paralyzed him from the chest down.

"I was working so hard toward the goal and everything seemed as if it was taken away," Anderson said.

So he started working hard toward a new goal: walking again. The Chicago native enlisted the help of physical therapists at the Rehabilitation Institute of Chicago, where he says sessions were more like basic training.

"I remember transferring for the first time out of a bed to my wheelchair. Took me about five, 10 minutes to do, then my therapist said do it 20 more times," Anderson said.

Anderson also pushed himself, working hard to keep his body physically fit. Soon, he was ready for the next phase: a robotic exoskeleton.

The ReWalk device provides powered hip and knee motion to enable people with spinal cord injuries to stand upright and walk. Once Anderson puts it on, another person is required to be there as a spotter. His sister Angie helps by keeping him steady.

He has trained with an exoskeleton for three years, and now gets the chance to take home one of the $70,000 devices. It was a gift from an anonymous benefactor.

"It's allowed me to just feel better, be better and improve my quality of life," Anderson said.

Not only will the exoskeleton help Anderson walk again, it will be a valuable tool for researchers, who will study the device's impact on secondary medical complications.

Over the next year, scientists will study Anderson's use of the exoskeleton to determine long-term health benefits.

"I'm looking beyond walking. I see myself running. That's the goal," Anderson said.