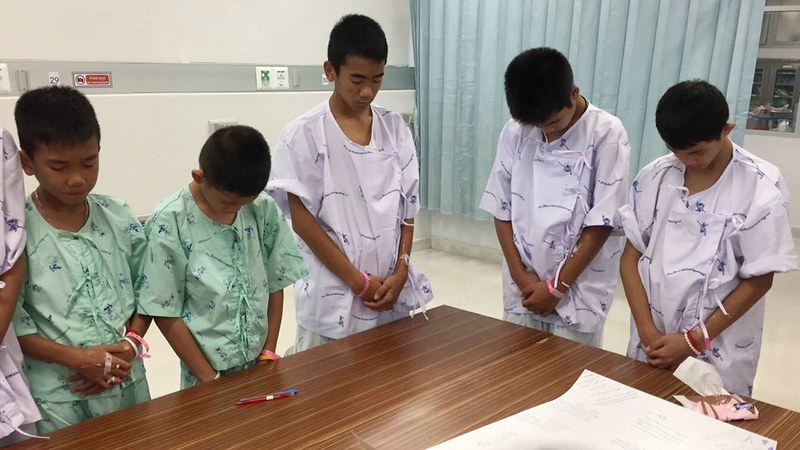 CHIANG RAI, Thailand -- As they continued to recover in the hospital, members of the youth soccer team rescued after spending 18 days in a flooded cave stopped to honor the life of the former Thai navy SEAL who died during the rescue operation.

Photos released Saturday by the Thai Public Health Ministry show the young men bowing their heads in prayer in their hospital ward. They also posed with a drawing of former Thai navy SEAL Petty Officer Saman Gunan, the sole fatality of the rescue operation, and wrote messages of thanks to Saman. Some of the boys appear to be crying in the photos.

Saman, 38, was a volunteer who had been engaged in the important mission of helping replace oxygen canisters along the route to where the boys were sheltering to make the hours-long passage possible. He collapsed and died on July 6 while diving; some officials told the Associated Press that Saman's own oxygen supply ran out during the dive.

Saman was granted a posthumous promotion to lieutenant commander by King Maha Vajiralongkorn Bodindradebayavarangkun and given the royal decoration of Knight Grand Cross (first class) of the Most Exalted Order of the White Elephant, the SEALs said Saturday on their Facebook page.

The former SEAL, who is being honored as a national hero, was cremated Saturday in his home northeastern province of Roi Et.