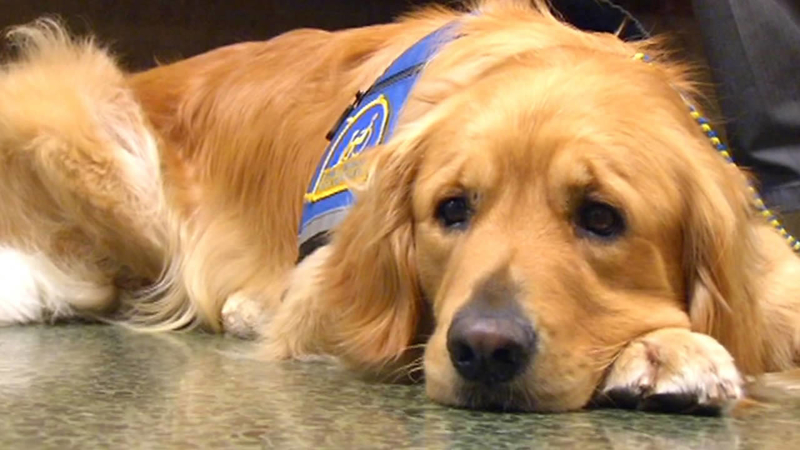 SAN FRANCISCO -- San Francisco has a new friend to help witnesses and victims who are uncomfortable in the criminal justice system. He's a professional who has received extensive training.

Faber is the first courthouse dog in San Francisco. Man's best friend is also a good companion in the stressful criminal justice environment.

"The legal system is very, very complex and very intimidating to many people, especially when we are dealing with vulnerable victims, young people, the elderly, people who have been subjected to very traumatic violence," said District Attorney George Gascon.

The golden retriever will be a soothing comfort during forensic interviews and other steps in criminal investigations. His handler works with the DA's office of Victim Services and describes how one young girl reacted with the pooch by her side.

"It provides enough calmness so she's better able to recall what had happened, so it aids in the fact finding process and so that's positive for everybody," said Phillip Pritting with the DA's office.

Faber comes compliments of a Bay Area non-profit Canine Companions for Independence, which has a breeding program. The dogs are socialized for a year and a half by volunteers. And on Tuesday we found out that coincidentally, Faber got his training from ABC7 newscast director Jerry Sandy and his family.

"It's the most gratifying thing to know that somebody in need can be helped," Sandy said.

Eventually the DA would like to see Faber in the courtroom when victims testify. But for now he will stick to therapy duties in the interview rooms and the hallways.

He has the magic touch not just with witnesses, but also to many of those who see him in the courthouse.