"Not one of my superiors have yet to send me a text, call, or email me to apprise me of any next steps to determine my status"
WLS
By Stephanie Wade 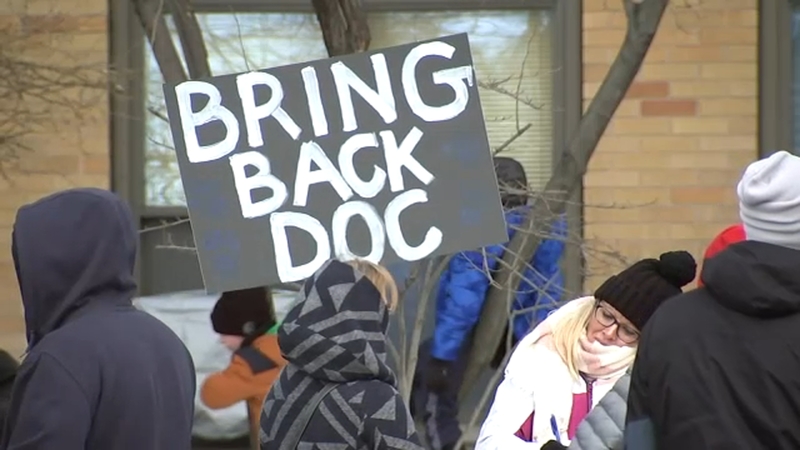 Suburban principal in limbo after removed for making masks optional

CHICAGO (WLS) -- The principal of a suburban Catholic school remains in limbo after he was removed last week for making face masks at the school optional.

Parents, students and community members once again lined the street Sunday to rally in hopes that the Archdiocese of Chicago hears them.

They said they want him reinstated at Queen of Martyrs Elementary School in Evergreen Park.

"It's been two years and it's enough, and I think you can tell by the show today in 15 weather, people are tired of it," said Jim Coogan, who was among the crowd.

This is the second protest by parents in less than a week. Parents also gathered on Wednesday in support of Mathius.

It was another large turnout Sunday, with roughly 100 parents and students gathering to support Principal M. Jacob "Doc" Mathius.

"I thought it was wrong," added Lauren Shavosky. "I think he did what adults should be doing right now. They should look at the science, the data; they should look at how it's affecting kids in a negative way and it needs to change. And he stepped up."

"He took a stand. I've never met the guy, but I appreciate what he did and I think he's right," said Coogan. "And I really hope he's back in school this week."

Mathius was removed last week for enacting a "mask optional" policy without the consent of the Archdiocese following a ruling by a downstate judge blocking Governor Pritzker's mask mandate.

"When the judge finally came out, I cried because I knew everything she wrote was true," said Patricia Wentzell. "I knew that in my heart and that's why it's been so painful."

"I'm a teacher. I see what's happening in the classroom. I see the lights in the kids eyes dim, the fear. It's time to stop," added Christine Shanahan McGovern.

The next day, the Archdiocese made masks optional for its schools, except in Chicago, Oak Park and Evanston, where they're mandated by local health department orders.

"I'm here because I have nine grandchildren. Four can be unmasked out in the suburbs now at a Catholic school, and my five back in Chicago are still masked and I'm an angry grandma," said Caryl Whitney. "I think whatever is good for one Archdiocese school should be good for all of them."

It's unclear if Mathius was placed on administrative leave or fired. The Archdiocese would only say that they do not discuss personnel matters.

It's also unclear to Mathius where his employment stands, saying he has not heard from anyone from the school on next steps or his status, but said he's humbled by everyone who has shown love and support for him.

"Not one of my superiors have yet to send me a text, call, or email me to apprise me of any next steps to determine my status," he told ABC7.

"I think if he didn't make such a bold move then who knows, kids could still be masked," said Shavosky

Last week, Governor J.B. Pritzker announced that Illinois will be partially lifting the state mask mandate on Feb. 28, with exceptions for schools, hospitals and nursing homes.

Pritzker said the changes will impact malls, restaurants, bars and places of business, but not schools. Schools are governed by a separate mandate and will be addressed separately.

He added that some local jurisdictions and businesses may still require stricter rules than the state and must be respected.

While Chicago still has a mandatory mask mandate, following the governor's announcement, Mayor Lori Lightfoot said that the city is also considering dropping the mask mandate at the same time as state officials, although it has not officially been decided yet.