Massive sexting scandal at NY HS leads to dozens of suspensions, some arrests 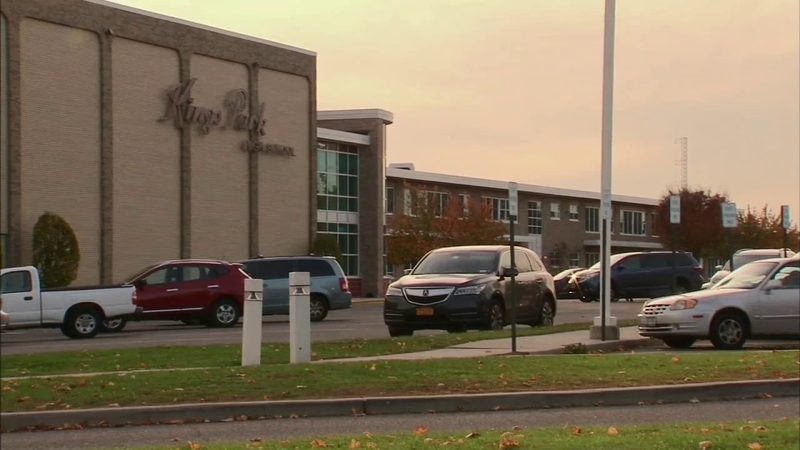 KINGS PARK, N.Y. -- There was a showdown on Long Island Tuesday after at least one student had to be escorted from school after showing up in violation of his suspension in a sexting scandal.

The teen is one of some 20 Kings Park High School students who have been suspended over the incident, which originated after two 14-year-old boys at nearby Smithtown High School were arrested and charged for allegedly shooting a video of the one of them having sex with a girl.

The suspended students are accused of either viewing the video encounter on their smartphones or sending copies to friends.

Kings Park administrators moved quickly to put the scandal to rest, with superintendent Dr. Timothy Eagen releasing the following statement shortly after the conclusion of the school day:

"The Kings Park Central School District has conducted and completed a thorough investigation surrounding the alleged sexting incident. The district believes that all student suspensions in relation to this alleged incident have been made in accordance with the district's code of conduct. At this time, we do not anticipate any further suspensions. Due to New York State privacy laws, the district is prohibited from sharing any further details regarding individual student disciplinary matters.

"The district regrets that this incident ever happened. Kings Park is a wonderful community with great kids and supportive residents. This incident does not define who we are as a community.

"Now we must move forward and continue to remain vigilant and proactive in educating our youth about the problematic use of today's technology, which has become a serious and global issue."

Many parents say that is an understatement. And one student, a sophomore, defied the suspension with the support of his parents.

Andrew Fenton, the father of AJ Fenton, said his son should not have been suspended for merely receiving an unsolicited video. AJ Fenton was escorted by police from the school on Tuesday morning after attempting to defy the suspension.

"He was unjustifiably, supposedly suspended, although we still have not been officially notified," Andrew Fenton said.

His son said he is being unfairly disciplined.

"I can't stop somebody from sending a text to me," he said. "I just looked at the video. I didn't send it to anyone."

He added he has since deleted the video.

But administrators were firm, suspending not only those suspected of forwarding or showing the video, but also those who simply received it yet failed to report it to school officials.

"These allegations are a very serious legal matter that the district does not take lightly. With that, we will be conducting our own investigation to further explore this incident, and students found to be involved may face serious disciplinary consequences for violation of the district's code of conduct."